Apple is updating its 12 inch MacBook. The 2016 model is still thin, light, and powered by an Intel Core M processor, much like last year’s model. But the new version comes with a choice of Intel Core M3, M5, or M7 Skylake processors, longer battery life, and four color options.

The laptop has the same 12 inch, 2304 x 1440 pixel IPS display as last year’s model, and it still has just a single USB-C port which is used for charging and connecting peripherals (including everything from flash drives to displays). You’ll need a dock, hub, or adapter if you want to charge the laptop and connect accessories at the same time. 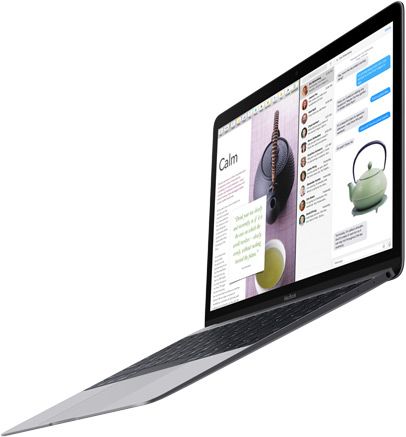 Apple now offers a rose gold version of the MacBook in addition to the gold, grey, and silver options that had previously been available.

The laptop has a 41.4 Wh battery for up to 10 hours of run time while surfing the web, a backlit keyboard, and a 29W USB-C power adapter.

Apple’s MacBook isn’t the thinnest laptop on the market. But it’s still pretty svelte, measuring just 0.52 inches at its thickest point. And it weighs just over 2 pounds.

Apple has also made a small update to the MacBook Air lineup: the 13 inch model now comes standard with 8GB of RAM instead of 4GB.