The new models are also easier to upgrade or repair. Well, kind of. 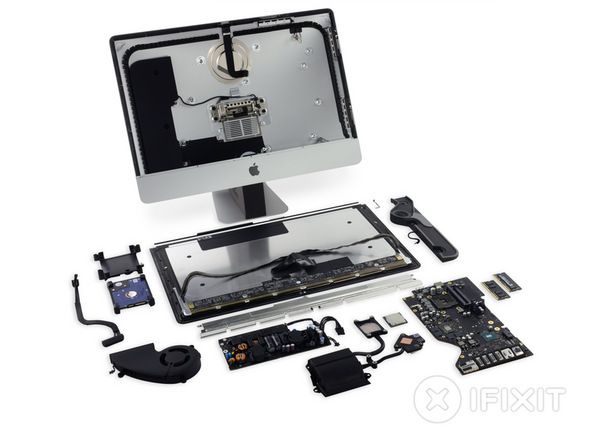 The folks at iFixit tore apart a new 21.5 inch iMac to see if it’s really what’s on the inside the counts. The bad news is that some components are a bit tougher to remove than on previous models, including the speaker on the right side of the computer.

The good news? The SSD can be upgraded, and since the RAM isn’t soldered to the motherboard, it can also be upgraded or replaced.

If you can get the case open and remove the logic board, you’ll find two SODIMM slots that take DDR4 SDRAM memory.

While replaceable memory wouldn’t be a huge surprise from most other computer makers, Apple has been moving away from removable memory in recent years, instead releasing devices with soldered RAM.

Even more surprising is the fact that the iMac has a removable CPU. You’ll have to open the PC, remove the logic board, and take off the heat sink to remove the processor from its LGA 1151 CPU socket. But theoretically it is possible to replace the processor with any other chip compatible with that socket.

Does this point to a future where Apple makes it possible to upgrade memory and storage on all iMacs? Not necessarily. As iFixit notes, Intel doesn’t currently offer a desktop-class Kaby Lake chip that doesn’t have a socketed design, so if Apple wanted to move to Kaby Lake, the company may not have had any options other than to go for an upgradeable option.