Apple’s new 13 inch MacBook Pro is the company’s first Pro laptop to feature an M1 processor. Apple says that means the new laptop delivers up to a 2.8X performance boost over its Intel-powered predecessor for general purpose computing. Graphics performance is said to be up to 5X faster and machine learning tasks that can leverage the M1 chip’s Neural Engine are up to 11X faster.

The new MacBook Pro 13 inch laptop also has the longest battery life of any MacBook to date, with up to 20 hours of run time while playing videos or 17 hours while surfing the web over WiFi.

Apple’s newest 13 inch MacBook Pro is available for purchase starting today for $1299 and up, and it should begin shipping next week. 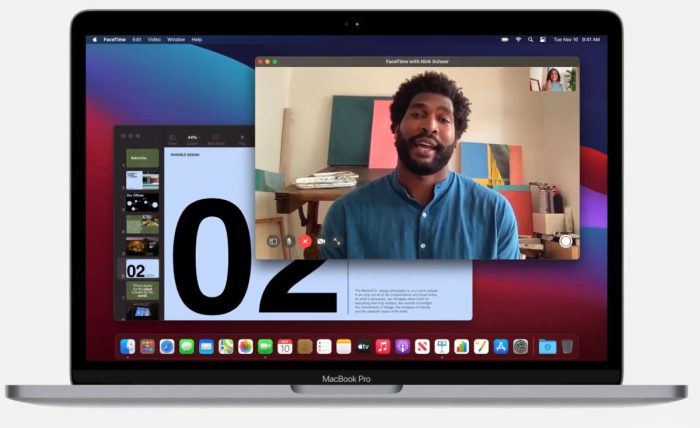 While the MacBook Pro is a thin and light laptop that measures just 0.61 inches thick and weighs just 3 pounds, it’s designed to deliver higher performance than its even thinner sibling, the new MacBook Air with an M1 chip. So while the new Air is a fanless, silent laptop, the new 13 inch MacBook Pro is not.

But the fan means you can get better sustained performance when performing demanding tasks such as video editing, compiling code, or rendering 3D graphics.

For example, Apple says this is the first time it’s delivered a 13 inch MacBook Pro that can play back full-quality 8K ProRes video in DaVinci Resolve without dropping any frames.

The new MacBook Pro features the latest version of Apple’s Magic Keyboard, a Touch Bar, and support for Touch ID. There are two Thunderbolt 3/USB4 ports which add support for peripherals including Apple’s 6K Pro Display XDR. You’ll also use one of those USB ports to charge the laptop thanks to an included 61W USB-C power adapter.

The base model features 8GB of RAM and a 256GB SSD, but the MacBook Pro can be configured with up to 2TB of storage, and up to 16GB of RAM which… seems like not a lot, given that this is a notebook aimed at Pro users. It’ll be interesting to see how well Apple has leveraged macOS Big Sur to take advantage of available memory.