But the gap between the iPhone 14 and iPhone 14 Pro is wider than ever. Not only do this year’s Pro models feature better cameras and displays, but they have a new design that replaces the front-facing camera notch with a new “dynamic island,” newer, faster processors.

The new iPhone 14 features a 6.1 inch display, an Apple A15 Bionic processor with a 6-core CPU and 5-core graphics. That’s the same processor as last year’s iPhone 13 Pro (which was basically the same as the chip in the entry-level iPhone 13, except that it had one extra GPU core).

Other features include a 12MP primary camera with a larger image sensor for capturing more light (and improving low-light photography), plus a 12MP ultra-wide camera and a 12MP front-facing camera with support for auto-focus.

Thanks to new satellite hardware, you can send messages to emergency services when you’re out of range of the nearest cell tower, and also share your location with contacts. Satellite service launches in November and is free for the first two years, which means it’s likely Apple will charge for the service in the future. 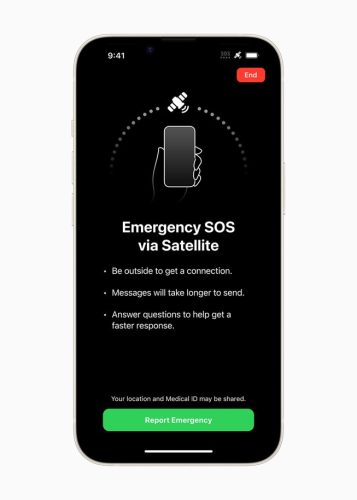 Apple also added support for car crash detection (something Google’s offered for some Pixel phones for years, but which is new to the iPhone family).

The iPhone 14 goes up for pre-order September 9th and should be available starting September 16th. Prices start at $799. 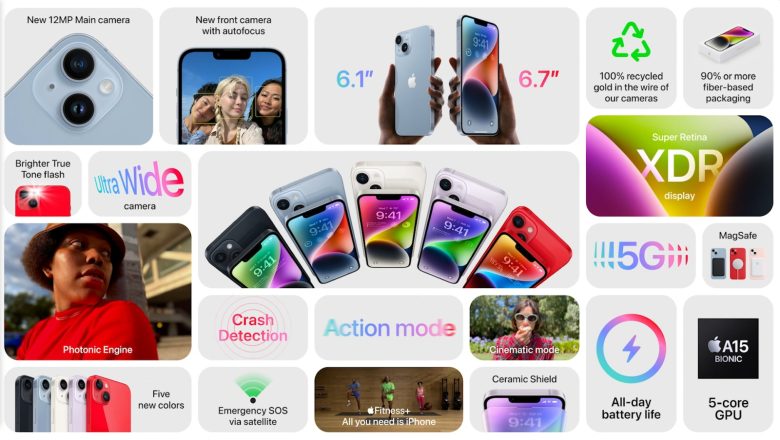 Apple also has a larger iPhone 14 Plus with similar features but a larger 6.7 inch display and an $899 starting price. This model also goes up for pre-order September 9th, but it won’t be available until October 7th.

Both phones have 1200 OLED displays with support for up to 1200 nits brightness. And both will ship without a SIM card slot in the US, offering only an eSIM function.

The new Apple 14 Pro, meanwhile, replaces the notch Apple has been using since the iPhone X with a new “dynamic island.” Basically it’s a hole punch cut-out in the display for the new, smaller FaceTime camera system. But Apple built a new user notification system with animations that allow notifications to look as if they’re expanding from the hole.

Both phones also have slimmer bezels and brighter displays than previous-gen iPhone Pro devices. The company says to expect 1600 nits brightness under normal conditions and up to 2000 nits peak brightness outdoors.

There’s also an Always On display feature for the first time on an iPhone (again, this is old school for Android devices). Apple says the screen refresh rate can be slowed to as low as 1 Hz and wallpapers can be dimmed to save battery life when the display is in this mode, while still making sure you never miss a notification. 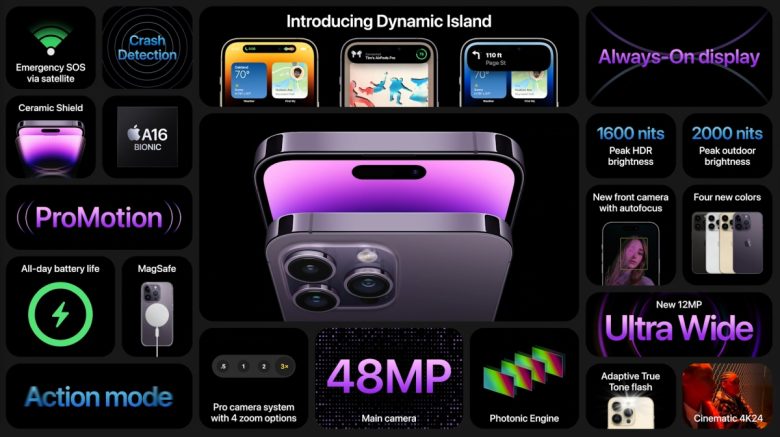 But the biggest differences between the iPhone 14/14 Plus and the iPhone 14 Pro/14 Pro Max are the processors and cameras. The Pro series have a new Apple A16 Bionic chip which is an 8-core processor with 2 Performance and 6 Efficiency cores, 5-core graphics with 50% more memory bandwidth, plus a new Display Engine and improved Image Signal Processor. It’s also Apple’s first 4nm chip.

There are also three rear cameras on the Pro model phones, including a new 48MP primary camera with support for quad-pixel binning (so you get brighter 12MP shots) or shooting 48MP photos in ProRAW mode. There’s also a 12MP telephoto camera and a 12MP ultra-wide camera, and Apple says all three cameras should perform better when taking low-light photos.

Like the iPhone 14 and 14 Plus, the new Pro series phones support car crash detection and emergency satellite communication.

Apple also introduced several other new products today, including three new smartwatches : the new $799 Apple Watch Ultra with a bright display, a rugged design, and GPS plus cellular capabilities, a 2nd-gen Apple Watch SE that starts at $249, and a new Apple Watch Series 8 for $399 and up.

iPhone 14 and 14 Plus press release