Apple is now selling its AirPods for $159, a little later than expected. When the company first introduced the wireless earbuds in September, the plan had been to begin shipping AirPods to customers in October. But the company delayed the launch for unspecified reasons.

This is the first set of truly wireless earbuds from Apple: there’s not even a wire connecting the left and right parts. Instead, you just slide one into each ear. But Apple isn’t the first company to release a product in this category.

Somewhat surprisingly, though, AirPods are among the most affordable examples of this new type of earbud. 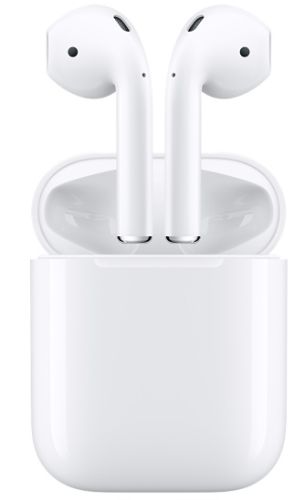 Bragi, Earin, Erata, Samsung, Motorola, and others also sell wireless earbuds, but prices for most of those competing models start at around $200 and some cost nearly twice as much as Apple’s AirPods.

That said, Bragi recently introduced The Headphone, a $149 set of earbuds designed to compete with AirPods on price.

Like most other wireless earbuds, Apple’s AirPods can be used as Bluetooth headphones with just about any device that supports the platform, including Android phones. But Apple users will be able to use exclusive features: for example, when you pair AirPods with your iPhone, they’ll automatically work with your iPad, MacBook, or other Apple products without having to go through a separate setup process.

Apple says AirPods should get up to 5 hours of battery life and they come with a case featuring a built in battery that lets you recharge the earbuds on the go.

Probably the weirdest thing about the AirPods? They look almost exactly like what you’d get if you took a set of Apple Earpods (the cheap headphones that come with iPhones) and cut off the cable. There’s even a bit of a vestigial tail.

Now that Apple is selling iPhones without 3.5mm headphone jacks, wireless headphones can seem like a wise investment, since they allow you to listen to music at the same time as your phone is charging (something you’d need a dongle to do if you were going to use wired headphones that connect to the iPhone 7’s Lightning port).

But there are cheaper options: I’m personally a fan of Mpow’s Cheetah earbuds, which sell for around $25. Sure, there’s a wire connecting the left and right speakers, and sound quality isn’t exactly audiophile-quality, but you could literally by 6 of them for less than the price of a set of AirPods.