Apple may be working on a visual voicemail service that will automatically create transcripts of your voice messages. How is this different from Google Voice, which has been available for Android users for years? According to a report from Business Insider, Apple’s service will put Siri in charge of the transcription. 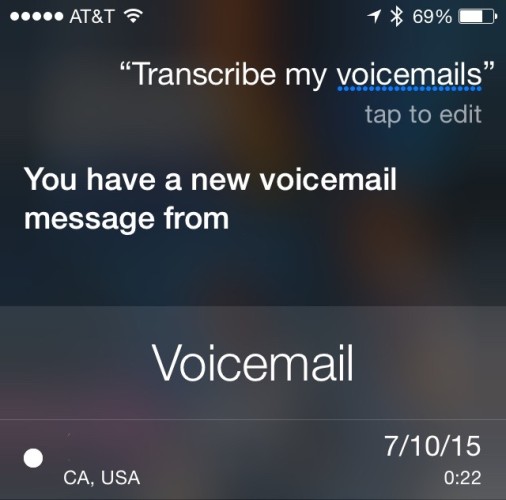 Apple employees are reportedly already testing this new way to check voicemail messages on iOS. Dubbed “iCloud Voicemail,” the service will send raw voice messages to Apple and Siri will transcribe them and send them to your iPhone.

While the details haven’t been announced yet, you will probably be able to simply ask Siri to check your voice messages and the transcribed words will appear within the personal assistant’s window (which is the reverse of Siri reading your texts and emails out loud to you).

This may be a new feature for iOS users, but Android users have had Google Voice transcribing their messages for years. In the past, Google Voice has been notoriously bad at transcribing things. However, recently Google announced it had been tinkering with the program and has reduced errors by 49 percent.

Perhaps Google knew that Apple was trying to get Siri to transcribe voicemails and decided it needed to up its game.

If Siri is capable of accurately transcribing voicemails, Apple is said to be planning to launch the service in 2016, likely alongside iOS 10. However, it is possible that Apple will scrap the service altogether if it can’t figure out a way to improve readability.

Siri isn’t even all that great at understanding me when I ask to play a specific song. I can’t imagine how it would fair against an answering machine.