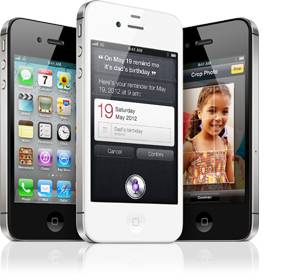 Apple introduced a new crop of mobile products today, and they’re all kind of familiar looking. The iPod touch and iPod Nano have barely changed, while the shiny new iPhone 4S looks exactly like an iPhone 4.

But under the hood it has a couple of major improvements, including a faster processor, a better camera, and faster mobile broadband.

The new phone has the same Apple A5 dual core processor as the iPad 2. The company says it should offer overall performance that’s as much as twice as fast as the A4 chip in the iPhone 4. It should also offer up to 7 times the graphics performance.

The iPhone 4s will also support HSPA+ mobile broadband networks with download speeds up to 14.4 Mbps. Apple isn’t going to bother calling the feature “4G,” but instead says it will offer faster speeds — which is true. It’s a world phone which will support both CMDA and GSM networks.

The phone has a new 8MP camera which will be able to shoot 1080p HD video. It will have real-time image stabilization, and Apple says the iPhone 4s will be able to snap photos more quickly than other cameras.

Without acknowledging that there was ever a problem with reception on the iPhone 4, the new iPhone 4s will be able to automatically switch between two included antennas depending on how you hold it.

Finally, Apple showed off a new voice recognition feature called Siri, which will let you perform a wide range of activities, including dictating to your device instead of typing on the keyboard. You can also ask your phone to schedule appointments, find nearby restaurants, or perform other actions.

The new phone will be available on October 14th from AT&T, Sprint, and Verizon. It will go up for pre-order on October 7th.

Apple will also continue to offer the iPhone 4 with a new 8GB model going for $99 on contract. The iPhone 3GS will continue to be available as well… but an 8GB version will now be free when you sign up for a contract.

The company also updated the iPod touch line today… a little bit. Apple will introduce a new white model to go with the black iPod touch. And the iPod touch is getting a cheaper price tag. The 8GB model now starts at $199. A 32GB iPod touch runs $299 and a 64GB model costs $399.

Apple is not upgrading the screen, camera, or processor on the iPod touch.

Finally, Apple introduced a software update for the iPod Nano. The new software replaces the grid interface with large icons that you can scroll between to switch functions — making better use of the screen real estate. The update will also include 16 clock faces for people that like to use the iPad Nano as a wristwatch by attaching a watch band.

Apple will also offer a new model with built-in fitness features, allowing you to track your walks or runs without plugging in an external sensor.