When Apple launched its first tablet, one of the things that made it different from the dozens of Windows tablets that came before was that you didn’t need to use a stylus. Early iPads were basically iPhones with big screens and they were designed to run apps that you could use with your fingers.

In fact, Apple founder Steve Jobs once famously said that “if you see a stylus, they blew it.” I don’t exactly think he was rolling in his grave five years later when Apple launched the iPad Pro with an Apple Pencil… after all, it was a “pro” device aimed at folks who wanted extra functionality. You still don’t need a stylus to use an iPad Pro, it’s just an optional feature for folks who want it.

But it looks like the Apple Pencil isn’t just a Pro feature anymore. The company just unveiled its first new iPad of 2018, and it’s an entry-level 9.7 inch model aimed at the education market. And it’s the cheapest Apple product to feature Pencil support to date. 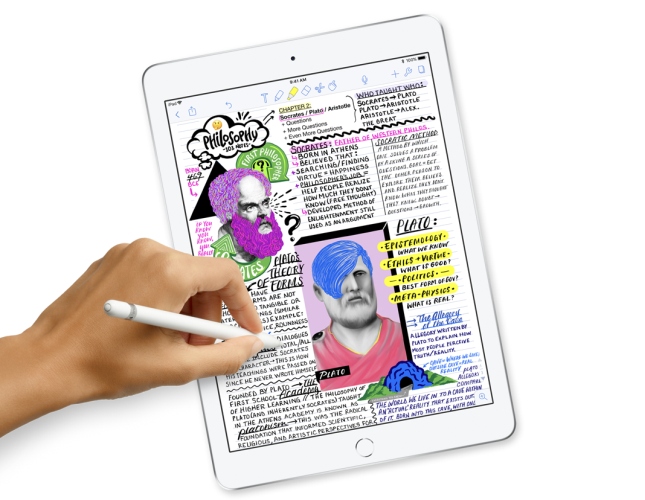 The new Apple iPad has a 2048 x 1536 pixel display and an Apple A10 Fusion processor, which is a step up from the A9 chip that powered last year’s entry-level iPad… although it’s still a generation behind the Apple A11 Bionic chip found in the company’s latest iPhones.

Apple’s new tablet has an 8MP rear camera with 1080p video recording support, a Facetime HD camera on the front, a Touch ID fingerprint sensor in the home button, and support for up to 10 hours of battery life.

There’s optional support for 4G LTE with speeds up to 300 Mbps.

Apple unveiled the new tablet at an education-focused event today in Chicago, where the company noted that there are more than 200-thousand educational apps available for iPads.

The new 2018 iPad will have the same $329 starting price as last year’s model for consumers… but education customers can buy the iPads for $299 and up.

The Apple Pencil is still sold separately for $99 (or $89 for students), which drives up the starting price… especially when you compare the new iPad to Acer’s new $329 Chromebook Tab 10 which runs Android apps, has a full desktop version of the Chrome web browser, and comes with a pen.

Update: Well, there is a cheaper option. Logitech and Apple have unveiled a new $49 Crayon accessory.