Apple is sending out invitations to a March 7th event in San Francisco, where the company is expected to introduce its next-generation iPad. If you had any doubts that this will be an iPad event, a look at the invitation pretty much confirms it. 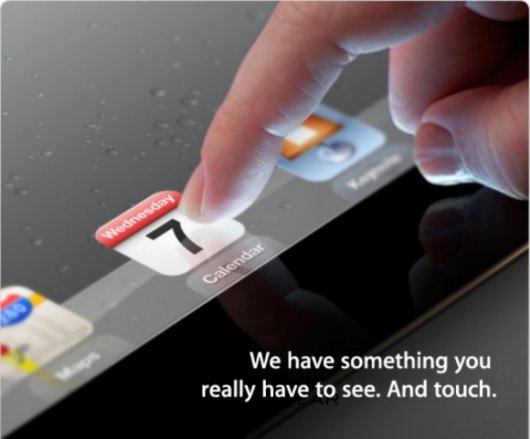 It’s not clear that the photo actually shows the iPad 3 rather than an iPad 2… but the display certainly looks pretty great in that picture.

Rumors about the iPad 3’s new features have been floating around the internet for months — and one of the most likely updates is a higher resolution display. The latest Apple iPhone and iPod touch models feature 3.5 inch, 960 x 640 pixel displays, while the much larger iPad 2 has a 9.7 inch, 1024 x 768 pixel screen with a much lower pixel density.

Other rumors suggest the new device could have a faster processor and improved graphics performance… both of which seem like pretty safe bets. The iPad 3 may also include support for 4G mobile broadband… but I wouldn’t gamble any money on that.