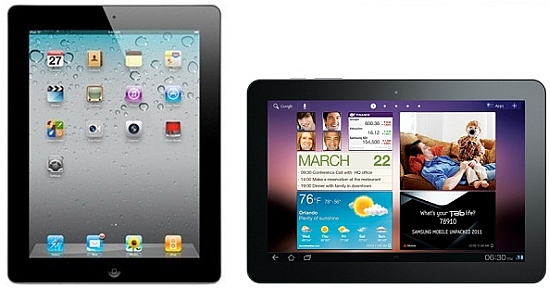 When a judge holds up a Samsung Galaxy Tab and iPad side-by-side and the company’s own lawyers can’t tell the difference, you know things aren’t going well. Fortunately, Apple was kind enough to offer up a few helpful hints for the design crew at Samsung to assist them in their quest to avoid future litigation.

Some of Apple’s suggestions are truly giggle-inducing. For starters, they put forward the option of using “profiles that aren’t slim.” That’s a polite way of telling Samsung to make thick, chunky tablets. Apple also proposes not building rectangular devices, this in an era when nearly every single laptop, smartphone, and tablet is made in that mold. Generously, however, Apple says that Samsung could always just not round the corners of its tablets. Crisp 90-degree angles aren’t something you find on many devices (certainly not on Apple products), but that could have a lot to do with the desire to make them slip easily into pockets, sleeves, and cases — and not put out an eye accidentally.

Apple also has some ideas for the bezel: make it wider, use a color other than black, and jazz it up with “substantial adornment.” Heck, why not combine all three and produce a blinged-out Galaxy Tab with a nice royal blue front bezel encrusted with Swarovski crystals? There’s also the snide suggestion of an overall “cluttered appearance” and a move to non-horizontal speaker slits.

After reading Apple’s list, it does make you take a good, long look at the state of devices today. With a few exceptions, just about everything — phone or tablet — has become a rounded-off rectangle with a black front bezel, made as thin as possible, with a thin, sideways slit for a speaker. Even if Samsung doesn’t try some Nokia-like designs, a good place to start would be actually printing its name on, say, a tablet bezel rather than simply Photoshopping it onto digital images that are plastered across the web. Thankfully, they’ve at least done that on the Galaxy Tab 10.1N — but Apple wants it banned in Germany, too.

13 replies on “Apple to Samsung: build non-rectangular tablets and Bedazzle them”