It’s barely been a month since Apple introduced the iPhone 5 and 5th-gen iPod touch. But the company’s not done launching new products this year. Apple is sending out invitations to an October 23rd event, where the company says “we’ve got a little more to show you.”

The smart money is on a “little” new tablet… which may or may not be called the iPad mini. 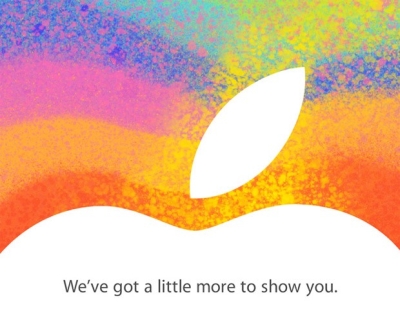 Rumors have been running rampant for much of the year, suggesting that Apple may be preparing to launch a new iPad with a 7.85 inch display.

If you believe the rumor mill, it will have a 1024 x 768 pixel display and a much lower starting price than the $499 Apple charges for the new iPad with Retina Display.

In order to keep costs down, Apple could also use an older processor rather than the A6 chip found in the iPhone 5, or cut other corners.

Why would Apple want to release a smaller iPad and charge less for it? First, because one size doesn’t fit all. While tablets with 10 inch displays are popular devices for surfing the web, watching videos, and playing games, some people prefer a smaller, lighter, more portable device for reading eBooks or other activities.

Second, because Apple faces growing competition from companies including Google, Amazon, and Barnes & Noble in the low-cost tablet space. When the first iPad hit the streets for $499 in 2010, observers were impressed with its reasonably low starting price. Apple wasn’t known for making inexpensive products, but at the time $499 for a tablet was a pretty great price.

Samsung, HP, Lenovo, Motorola, Toshiba, Acer, Asus, and other PC makers tried to compete by introducing their own tablets for similar prices… but sales have largely been disappointing. The tablets that have eaten into Apple’s market share the most have been 7 inch devices like the Google Nexus 7, Amazon Kindle Fire, and B&N NOOK Tablet, with prices around $200.

If Apple charges $300 or less for an iPad mini, it could be harder for other companies to compete on price.

A funny thing has happened in the last few years. Smaller has come to mean cheaper. Once upon a time (about 5 years ago), tiny computers cost more than their larger cousins. That’s because miniature components ain’t cheap.

But for the most part in 2012 smaller does mean cheaper. That’s because budget devices like the Kindle Fire generally cut more corners than larger tablets such as the iPad. So even if Apple wanted to unveil a high-priced, premium tablet with a 7.85 inch display on October 23rd, I think the company would have a hard time convincing anyone to buy it unless it costs less than the $499 iPad.

Update: 9to5Mac reports that “little” could also refer to something else — a new 9.7 inch iPad with a Lightning connector in place of the older iPad docking port. That would probably be introduced alongside the iPad mini, not instead of it.