Apple is probably better known for its smartphones and tablets than for its laptops and desktop computers these days. But in spite of constant rumors that the company eventually plans to merge its iPhone and Mac operating systems, the company says the two platforms will continue to be separate… kind of.

The company does want to make it easier for developers to bring iOS apps to macOS though. So Apple has started to bring some of the framework used by iOS apps to Mac to make the process of porting smartphone and tablets apps to run on Mac computers.

Speaking during today’s WWDC keynote, Apple’s Craig Federighi said this is the start of a multi-year project.

Phase one involves Apple bringing some of its own mobile apps to the desktop. The company is starting with Apple News, Stocks, Voice Memos, and Home. All four of those apps will be available for Mac when macOS Mojave rolls out this fall… although you can get an early look in the developer beta that launches today.

Apple is still early in the process though, so it’s not making the new tools available to third-party developers yet. But it will do that sometime in 2019. 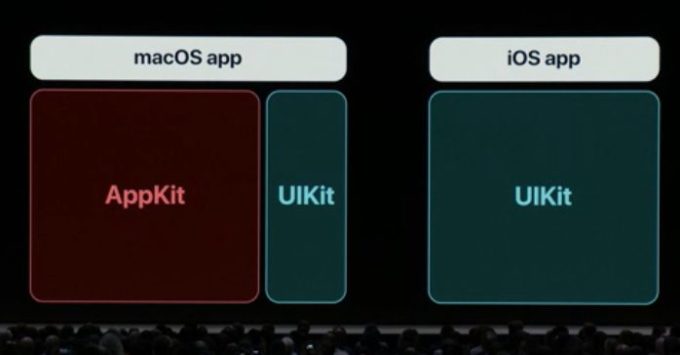 The move doesn’t necessarily mean that millions of apps in the iOS App Store will suddenly be available for Mac. Developers will still need to port them, but the goal is to make it possible to do that with minimal code changes.

That’s likely to be easier to do with some apps than others. Most mobile apps are optimized for touchscreen displays, for example. While it’s trivial to convert some touch activities into mouse or touchpad clicks, others might be hard to replicate on devices that don’t have touchscreens…. which would be every Mac released to date.

Of course, while Apple has resisted adding touchscreens to its laptops and desktops in the past, maybe the addition of support for iOS apps will help give the company the justification it needs to release Mac hardware with touch panels in the future.