The iPhone 5 hits stores in a few days, but Apple has already released the iOS 6 operating system for existing iPhone, iPod touch, and iPad models. You can download the latest version of Apple’s mobile operating system through iTunes, or by visiting the General Settings section on your mobile device and tapping the Software Update button to check for updates. 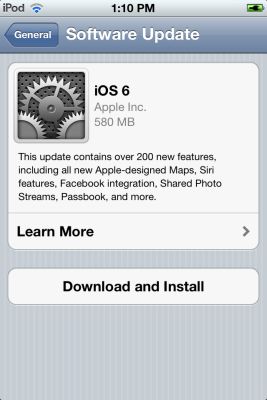 We have mode details about what’s new in iOS 6 at Mobiputing.

You can install iOS 6 on:

But not all devices support all of the new features in iOS 6. For instance, Siri voice assistant still requires an iPhone 4S or newer device (It will run on the new iPad or the 5th generation iPod touch, though).

To take Panoramic photos you’ll need a 5th gen iPod touch or an iPhone 4S or newer phone. Engadget has a good break-down of which devices get which new features.

And it’s questionably whether some changes are for the better. The new Maps app, for instance, doesn’t have directions in as many regions as Google Maps and doesn’t offer public transportation directions.

If you rely on those features, you might want to hold off on updating. If you like to jailbreak your device, you should also probably pass on this update for now. But if you want to get a bit of the iPhone 5 experience without actually upgrading to an iPhone 5, this is the next best thing.

One reply on “Apple releases iOS 6 for iPhone, iPod touch, and iPad”