Apple released a minor software update for iPhone, iPad, and iPod touch devices this week. It offered improved maps for Japan and fixed a security vulnerability that could allow users to access the Phone app on an iPhone without first entering a security code.

But that’s not the only vulnerability Apple patched in iOS 6.1.3 — the company also patched the security holes hackers had been using to jailbreak their devices. In other words, if you’ve jailbroken your device you might want to avoid updating to iOS 6.1.3 for now. 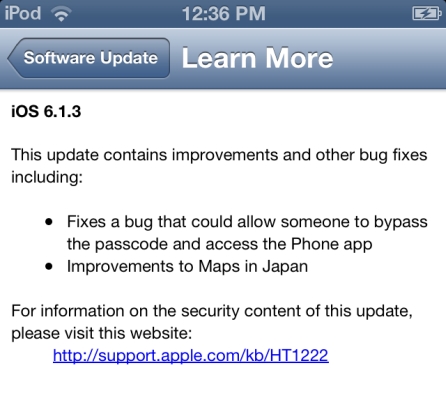 The evasi0n jailbreak utility works on most devices running iOS 6.0 through iOS 6.1.2. But it no longer works with iOS 6.1.3.

As evad3rs team member @musclenerd noticed, Apple even gives the team credit for finding 2/3rds of the security holes that were patched in the latest software update.

There’s good news for folks running iOS 6.1.3 on an older iPhone or iPod touch: you can still use Redsn0w to jailbreak the software on any device with an Apple A4 or older processor. Redmond Pie has instructions for performing a tethered jailbreak.

Jailbreaking an iOS device allows you to install apps from sources beside the App Store, including software that has access to system files and settings that Apple normally doesn’t allow. This lets you change the look and feel of an iOS device or change the behavior by doing things like changing your default web browser.

Of course, now that Apple has patched the security vulnerabilities used by the evasi0n tool, folks who make a hobby of this sort of thing will be hard at work looking for other security flaws to exploit for future jailbreaks.