Apples has released two minor updates to iOS since releasing iOS 6.1 a few weeks ago. And neither of them have fixed the security hole used by the evasi0n jailbreak utility.

So just hours after iOS 6.1.2 was released this week, the folks at team evad3rs released an updated tool for jailbreaking an iPhone, iPod touch, or iPad running Apple’s latest mobile operating system. 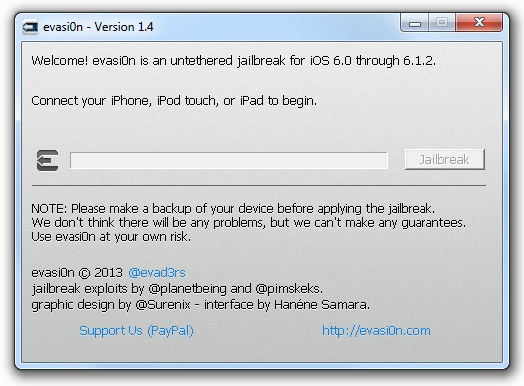 You can download evasi0n 1.4 for Mac, Linux, or Windows at evasi0n.com. The software lets you run unsigned code on an iOS device, which means you can run apps that aren’t downloaded from the App Store, including software that changes the look and feel of the iOS operating system.

The software should work on most recent devices running iOS 6.0 or later. It doesn’t work with the Apple TV, but there’s a different app for that (which uses the same exploit as evasi0n).