After a three-year break, Apple’s flagship music device, the iPod, has finally gotten a bit of love. Today, the company quietly updated its online retail store to feature a new lineup of the nano, shuffle, and touch, complete with new colors and a few upgrades under the hood.

The sixth-generation iPod touch, has been upgraded with a 64-bit A8 processor, an 8MP iSight camera with an improved HD front-facing camera, a motion-tracking M8 coprocessor chip, and a larger 128GB model. The screen size remains the same at four inches with an 1136 x 640 pixel resolution screen at 326 ppi. 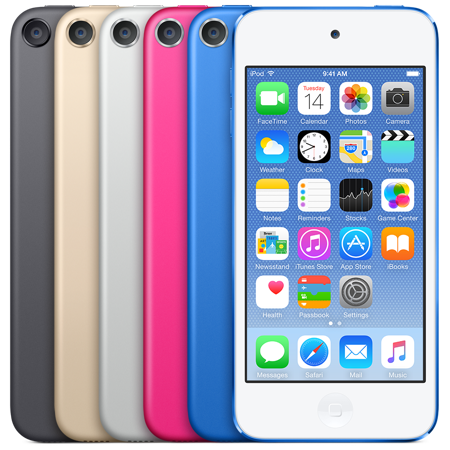 The camera is now capable of panorama shots and burst mode. It also supports slo-mo and time-lapse video, just like the current model iPhone.

It has been so long since Apple updated its music-focused device that rumors were starting to float around that the company might retire the iPod line. While the refresh isn’t a big one, it is likely that Apple is hoping to generate more interest in its new music streaming service launched just a few weeks ago.

Update: While the new iPod touch has an Apple A8 processor that’s similar to the one used in the iPhone 6, it looks like Apple has underclocked the chip to run at 1.1 GHz instead of 1.3 GHz. That means the iPod touch will probably offer performance that’s on par with an iPhone 5S… which is still a big improvement from the 2012-era iPod touch.

Also, it looks like Apple has included 1GB of RAM in the new model, up from 512MB for earlier iPod touch models.