Apple’s recent MacBook Pro laptops feature a Touch Bar above the keyboard that’s basically a thin OLED touchscreen display that can show different buttons depending on what you’re doing with your laptop.

But the keys on the keyboard? They remain the same no matter what software you’re running… for now, anyway.

Last year Apple filed for a patent on a dynamic keyboard with displays under each key that could adjust to show different letters, numbers or symbols. This week the US Patent Office approved the patent. 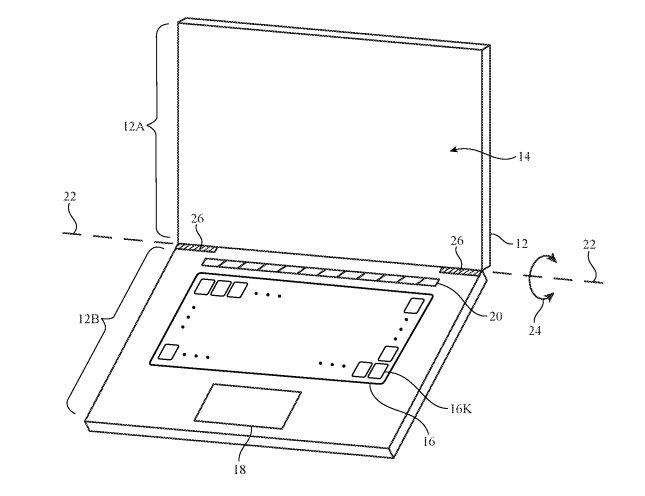 That doesn’t mean Apple is definitely going to bring dynamic keyboards to its products – like most big tech companies, Apple often applies for patents on technology that never sees the light of day. But it seems like Apple is at least thinking about dynamic keyboards.

Among other things, this style of keyboard would allow you to adjust the keyboard layout for different languages or change from QWERTY to DVORAK, for example. It could also come in handy if you’re running software that relies heavily on keyboard shortcuts – instead of remembering that I have to hit R to zoom in and T to zoom out when using Pro Tools to edit audio, I wouldn’t mind a keyboard that showed Zoom+ and Zoom- on those keys when running that software while reverting to R and T when using other applications.

Apple isn’t the first company to come up with the idea for a dynamic keyboard.

Years ago, design studio Art. Lebedev offered the Optimus line of premium keyboards with displays beneath each key. The fact that the product line has been discontinued probably gives you an idea of how popular they were… but it’s unclear if that’s because the idea was too niche or if the keyboards’ high price tags are what did them in.

For a more recent example, there’s the Nemeio Keyboard which features an E Ink display below clear keycaps and is expected to ship in September 2021 following an Indiegogo crowdfunding campaign.

If Apple does decide to follow through on its idea, the patent describes the configurable keyboard being for both laptop and desktop systems, so maybe this will end up in a next-next-gen MacBook Pro or maybe it could be used for an optional desktop keyboard, which would give customers the option of buying a dynamic keyboard or one with static keys depending on their needs.

via Patently Apple and 9to5Mac