Apple made some bold claims when the company unveiled its first custom chip designed for Mac computers. It looks like many of those claims were true.

The new MacBook Air, MacBook Pro, and Mac Mini with Apple M1 processors are shipping today, and the first reviews have gone live. For the most part, tech journalists who have spent a few days with Apple’s latest MacBooks have confirmed that they’re some of the fastest laptops available… while still offering all-day battery life.

The new Mac Mini also punches well above its weight class, offering strong performance for a mini PC. But Apple’s M1 chip is a low-power processor that’s not necessarily going to beat the latest AMD Ryzen Threadripper or Intel Core i9 or Xeon chips in heavy-duty workloads.

Apple has been making some of the fastest smartphone and tablet processors for a long time, so it probably shouldn’t come as a huge surprise that the company was able to translate its success into a blazing fast laptop processor.

By moving from Intel’s x86_64 chips to its own custom ARM-based silicon, Apple also has far more control over the way its software and hardware interacts.

But what does surprise me a little is that reviewers have found that the performance gains don’t just apply to applications that have been compiled to run natively on ARM architecture. Apple’s Rosetta 2 technology translates x86_64 applications to run on its M1 processor and for the most part they seem to run at least as fast on Macs with M1 chips as they do on previous-gen Macs with Intel chips.

It’s possible that there are some applications reviewers haven’t tested yet which will run poorly under Rosetta 2. But with key developers like Adobe busy porting their apps to ARM, the chances of running into compatibility problems will likely diminish with time.

That’s something that Microsoft and Qualcomm have not been able to achieve with their partnership to bring Windows 10 to ARM-powered laptops and tablets. While Windows apps compiled for ARM can run smoothly, many x86_64 applications are sluggish on ARM-based Windows computers… if they run at all.

Does that mean that the new MacBook Air, MacBook Pro, and Mac Mini are slam dunks? Not necessarily.

Reviewers note that they’re incredibly fast and responsive, resume from sleep almost instantly, support both macOS and iOS/iPadOS apps, an offer performance that beats most Intel or AMD-powered laptops. But there are some drawbacks.

First, the RAM is not user upgradeable. If you buy a Mac with an M1 chip and 8GB of RAM, you will not be able to upgrade in the future. And if you need more than 16GB of RAM, you’re out of luck, because the chip does not support it.

Also not supported? External GPUs. While the Apple M1 chip has a pretty good integrated GPU, it’s still an integrated GPU… which may not be good enough for serious gamers or graphics/video editors. These computers do have Thunderbolt/USB 4 ports, but they’re not designed to work with external graphics cards.

And Macs with Apple M1 chips also seem to top out at supporting two displays. If you opt for a Mac Mini that means you can plug in two monitors. If you pick up one of the company’s new MacBooks with M1 chips, you can only plug in one external display (because the built-in display counts as the other screen). 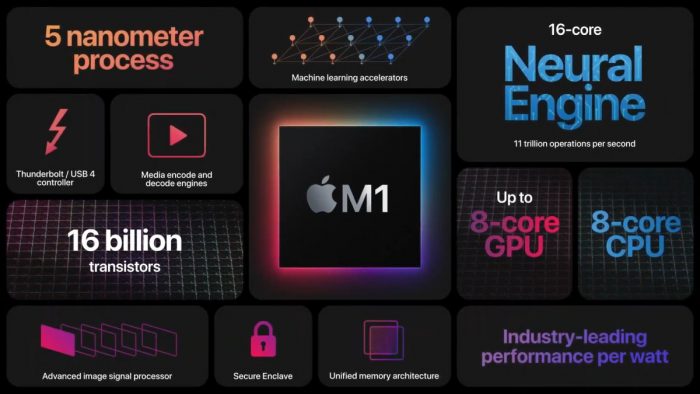 Another thing to keep in mind is that while all three of the new computers have Apple M1 processors, the MacBook Air has two things setting it apart from the MacBook Pro and Mac Mini:

The good news about the fanless model is that it runs silently and still offers great performance. The bad news is that it cannot maintain peak performance indefinitely – as the computer warms up, the processor will slow down a little bit to cool things off. That means that for many common tasks, the MacBook Air is just as speedy as the other computers. But if you’re compiling code or rendering media projects that will take a long time to complete, you’ll probably have an edge if you go for a model with a fan.

According to The Verge, Apple’s thermal throttling is a little different from what we’ve come to expect from computers with Intel or AMD chips. Rather than running at a base speed and offering boosts of “turbo” performance when needed, Apple’s M1 processor runs at its top speed most of the time, and only slows down when the system needs to cool off a bit.

Despite that, it’s a low-power processor that allows Apple’s laptops to deliver 10+ hours of battery life under heavy load. 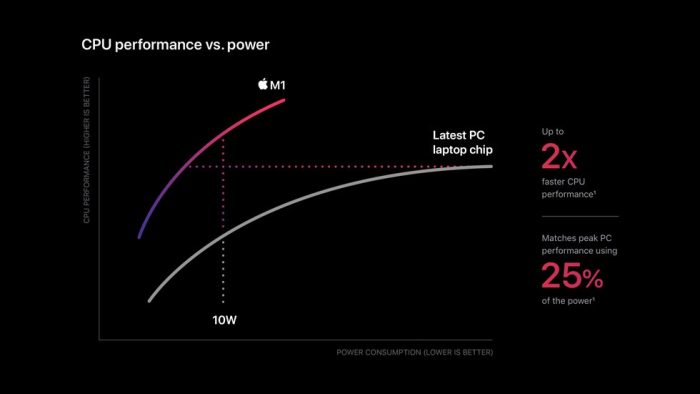 Reviewers also suggest that Apple has worked out some keyboard issues that had afflicted previous-gen MacBooks. The Touch Bar on the MacBook Pro remains an acquired taste. And both of the new laptops have lousy cameras.

It’s also increasingly unclear why Apple refuses to release a MacBook with a touchscreen display. For years the company insisted that iPads were the appropriate device for those who wanted touch, and iOS/iPadOS was designed from the ground up to support it. But now that iPad and iPhone apps can run on Macs, it’s odd that you can’t actually interact with those apps the way they were designed to be used: by touching them with your fingers. 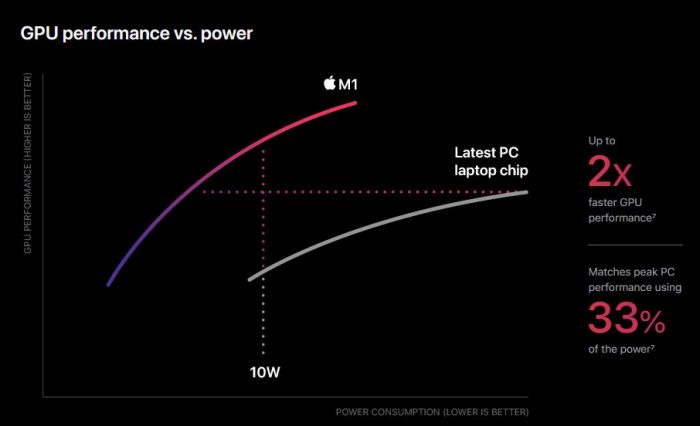 All of which is to say that for the first time in years, I’m actually kind of tempted to pick up a Mac the next time I’m in the market for a computer. While I’m not a huge fan of the company’s walled garden approach to app stores, I do appreciate the idea of a computer that’s both faster and which uses less power than most Windows or Linux laptops on the market at the moment.

But at this point I’m thinking that if I do make the move (and that’s a big if), I might wait another generation or two until Apple is ready to offer ARM-based Macs that support more than 16GB of RAM, touchscreens, and more than two displays (although that last one’s not necessarily a deal-breaker for me). I also wouldn’t mind more ports – the new laptops have just two USB 4 ports and a headphone jack.

Here are some of first reviews of Apple’s new Macs with M1 chips:

AnandTech’s Mac Mini review also has a deep dive into some of the chip details that Apple hasn’t publicly disclosed. For example, the Apple M1 processor’s four high-performance “Firestorm” CPU cores seem to be clocked at 3.2 GHz, which is a little higher than the 3 GHz speed of the Apple A14 chip used in the latest iPhones and iPads.

Power consumption seems to range from 4.2 watts at idle to about 27 watts under heavy workload. So power consumption is roughly similar to what you’d expect from a computer with a 20-24 watt TDP, as measured by other chip makers.