Apple’s newest MacBook Air is the first version of the company’s thin and light laptop with a so-called Retina Display, featuring a resolution of 2560 x 1600 for a total of 4-million pixels (or four times as many as you’d find in early MacBook Air models).

The 13.3 inch laptop also has an edge-to-edge glass display with narrower bezels, 48 percent more color, and an updated design — it’s 17 percent smaller than earlier models in terms of volume, and measures just 15.6mm thick, which is a 10 percent reduction.

It weighs 2.75 pounds and the new MacBook Air is made from 100 percent recycled aluminum.

The new MacBook Air goes up for pre-order today for $1199 and up and ships November 7th. 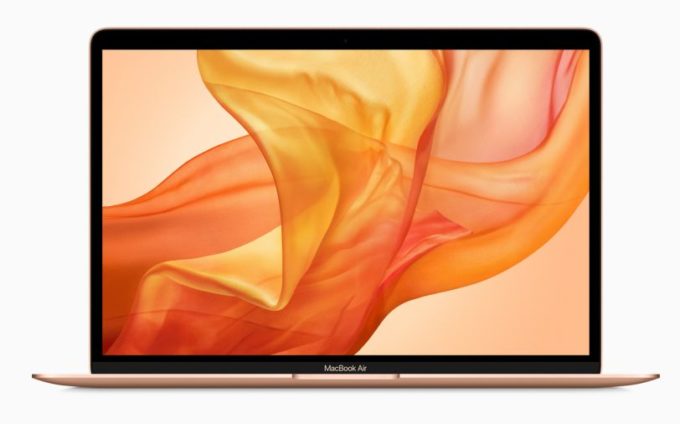 The new MacBook Air features an updated keyboard that Apple says is 4 times more stable, and which has a Touch ID fingerprint sensor in the upper right corner. You can use Touch ID  to unlock the device, login to apps, or make purchases using Apple Pay.

The touchpad is also 20 percent larger.

The notebook features two Thunderbolt 3 ports for connecting storage, displays, an external graphics card, a power adapter, and everything else… but those are the only ports you get.

It’s powered by an 8th-gen Intel Core i5-8210Y Amber Lake processor and supports up to 16GB of DDR3-2133 RAM and up to 1.5TB of solid state storage, which Apple says is 60 percent faster than the storage on earlier models.

Apple says the notebook offers up to 12 hours of battery life while web browsing, and up to 13 hours during iTunes movie playback.

The company will offer the MacBook Air in silver, grey, and rose gold color options, and the company says it developed a new aluminum alloy in order to make it possible manufacturer the computer from recycled aluminum. That reduces the carbon footprint of the computer by 50 percent.

The $1199 starting price gets you a model with a Core i5 processor, 8GB of RAM, and 128GB of storage. While you can find plenty of Windows PCs with similar specs for a lower price, that’s the lowest starting price for any Retina Mac computer to date.