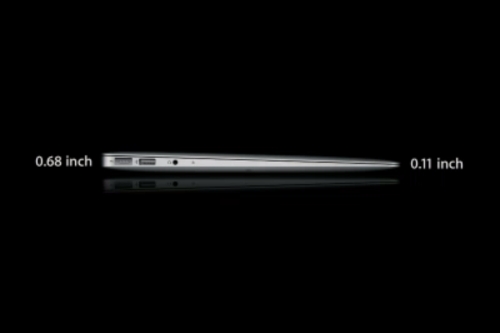 Apple has long stated that it has no plans to offer a netbook, instead suggesting that the iPhone or the iPad served the same niche as Windows netbooks. But the truth is, before the first consumer netbooks launched, Apple already had a very netbook-like product: The MacBook Air. It’s thinner, lighter, and generally smaller than a typical Mac laptop. It doesn’t have an optical disc drive. There were only two things really keeping people from calling it a netbook: The 13.3 inch display and the high price tag. The original MacBook Air cost about $1800.

Sure, the notebook offered more power than a typical netbook, thanks to its Intel Core 2 Duo processor and NVIDIA GeForce 9400M graphics. But really, the MacBook Air was sort of the overpriced netbook of the Mac world, since its specs tended to trail behind those of other Apple laptops. In fact, it’s been about two years since the MacBook Air received a major update… so you could say it was about due for one — and that’s exactly what it got today. 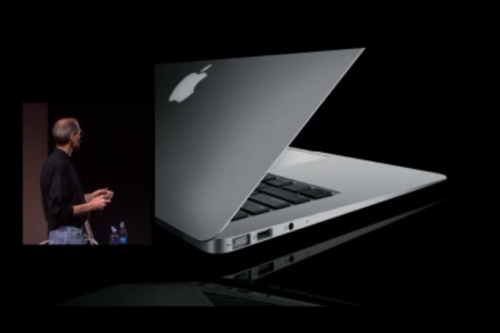 Steve Jobs today introduced the next generation MacBook Air, which he described as “what would happen if a MacBook and an iPad hooked up.”

The new model has a unibody construction, much like like other MacBook laptops. Despite rumors that the new MacBook Air would have an 11.6 inch display, there are actually two models, one with a 13.3 inch display and another with an 11.6 inch screen.

It has a 1440 x 900 pixel display. It has a full sized keyboard, and a webcam. The laptop still has an Intel Core 2 Duo processor. The NVIDIA GeForce 9400M chip has also been replaced with an NVIDIA 320M chip.

The new MacBook Air models have solid state storage and no optical disc. Apple says like the iPad, the McBook Air will feature “instant on” capabilities and up to 7 hours of battery life while surfing the web over WiFi, and up to 30 days of standby time. 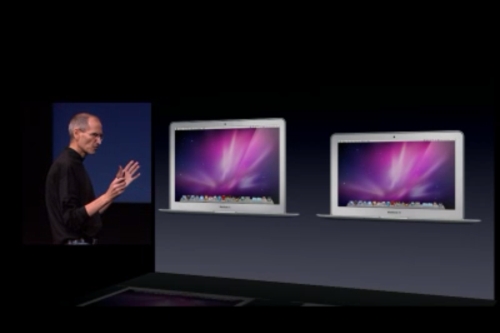 Both models come with 2GB to 4GB of DDR3 memory. 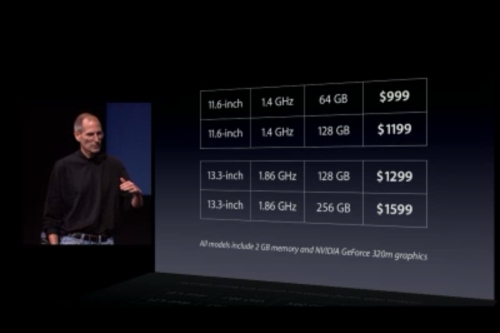 Apple has a comparison page highlighting the differences between the 11.6 inch and 13.3 inch models. It’s not just size and screen resolution. The smaller model will also have a slower processor, with a choice of a 1.4GHz or 1.6GHz chip, and a choice of 64GB or 128GB of storage, while the larger is available with a 1.83GHz or 2.13GHz processor and 128GB to 256GB of storage. Perhaps the most surprising difference? While both models have 2 USB ports, only the larger version has an SD card slot.

You can find more photos from the launch event below.