But the bigger news may be the new Apple A11 processor. It’s a hexa-core chip that features the first GPU designed by Apple after the company ended its deal with Imagination Technologies.

The iPhone 8 and 8 Plus are also among Apple’s first phones to support wireless charging. 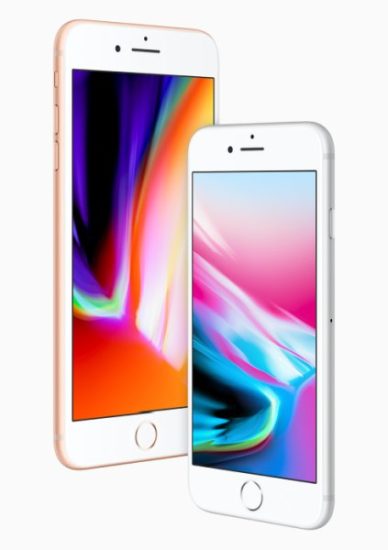 The Apple A11 processor features two high-performance CPU cores that the company says is 25 percent faster than those in the iPhone 7 and 7 Plus, and four high-efficiency cores that offer a 70 percent improvement. The controller also offers better multithreaded workload support, and the company says the new GPU is 30 percent faster than its predecessor, while using half the power.

Apple says the iPhone 8 Plus has new image sensors for its 12MP dual rear cameras, and the 12MP single-lens camera for the iPhone 8 has also been updated. Both support optical image stabilization.

While the new 4.7 inch iPhone 8 and 5.5 inch iPhone 8 Plus don’t look all that different from the iPhone 7 family, Apple has updated the design in a few ways. The new phones feature glass on the front and back, as well as an aluminum frame. And the new phones have Apple’s True Tone displays, which were first introduced with Apple’s iPad Pro 9.7.

The Apple iPhone 8 and 8 Plus will be available in silver, grey, and gold (pink). The new phones support the Qi wireless charging standard, which means that you should be able to use a variety of existing third-party wireless chargers.

Both models will be available with 64GB to 256GB of storage.

2 replies on “Apple launches iPhone 8 and iPhone 8 Plus”