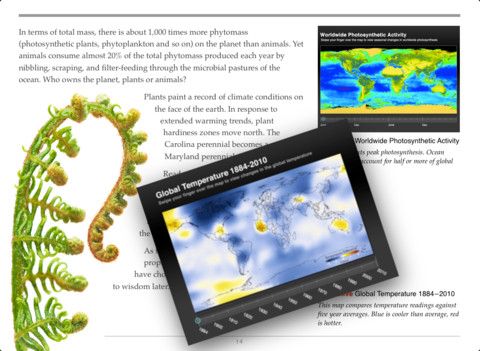 Apple wants to re-invent the textbook for the digital age. The company unveiled iBooks 2 for the iPad today, with support for digital textbooks that make use of nifty new features including video 3D animations, image galleries, and other features that your old physics textbook would scoff at.

Digital textbooks are also easier to keep up to date than their physical counterparts and an iPad is a lot lighter to carry in your backpack than 5 or 6 heavy textbooks. Apple says 1.5 million iPads are already being used in educational settings and there are tens of thousands of educational apps available for the tablet.

When you’re using iBooks 2 you’ll be able to make notes or annotations and even turn your notes into flash cards. Book publishers can also include quizzes in their books.

Apple isn’t the first company to try to take textbooks digital. Kno launched a line of tablets aimed specifically at the textbook market before scrapping the hardware business and focusing on software for the iPad. Now Kno’s software will go head to head with iBooks.

On the one hand, iBooks 2 definitely offers an attractive alternative to the traditional textbook model. On the other hand, while iPads certainly seem to be ubiquitous these days, there’s no getting around the tablet’s $499 starting price. Yes, textbooks are expensive, but you don’t need to shell out nearly five hundred dollars before spending another dollar on the first book. There’s also no way to buy used iBooks.

The good news is that once you actually have your hands on an iPad, books shouldn’t cost too much. Apple says some of the top textbook publishers have agreed to make titles available at $14.99 or less. Part of the reason textbooks tend to cost so much in the first place is that it’s expensive to print and distribute limited quantities. Digital distribution solves part of that problem.