For the past few years Apple’s iPhone release schedule has been fairly predictable: release a new model one year, and follow it up with a similar-looking phone featuring a spec bump. That’s how we went from the iPhone 4 to 4S, 5 to 5S, and 6 to 6S.

But this year the company is shaking things up a bit. Instead of the iPhone 7S you’d expect, Apple is launching three new phones: an iPhone 8, iPhone 8 Plus, and iPhone X.

The iPhone X represents a major design overhaul. The iPhone 8 series phones… are pretty much what you would have expected from iPhone 7S phones. They look nearly identical to last year’s models, but have beefier hardware.

Now the folks at iFixit have cracked pen the case of an iPhone 8 to see if it’s what’s on the inside the counts. And they’re pretty sure this is basically an iPhone 7S in all but name. 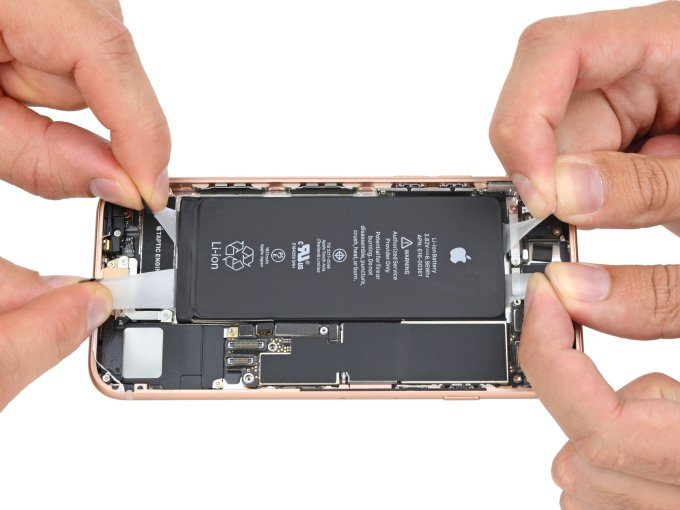 Since iFixit is an online repair shop and community, the goal of its official teardowns is usually to see what it will take to repair a broken device. The iPhone 8 gets a decent score of 6 out of 10, since the display and battery are relatively easy to replace… and those are the things you’re most likely to need to replace.

The phone has a case design that’s quite similar to the iPhone 7, and for the most part things on the inside are in the same place. But it looks like Apple has ditched its proprietary tri-point screws for Phillips #000 screws, which means one less specialized piece of hardware is needed to disassemble the iPhone 8.

Apple says the speakers are a bit louder, and the battery life is similar to the iPhone 7, even though there’s a slightly smaller battery in the new model. The LTE modem has been updated from a Cat 12 model to a Cat 16 version. And there’s a wireless charging coil.

Update: Apparently only some models have the Qualcomm X16 Gigabit LTE Cat 16 modem, while others have an Intel modem do not… which is why Apple isn’t positioning the iPhone 8 as a phone with Gigabit LTE.

But the biggest change is probably the new Apple A11 Bionic processor and the updated cameras. Early indications reveal that the new processor is a pretty major improvement: after running some tests, Tom’s Guide says the A11 Bionic is not only the fastest mobile chip to date, but it also outperforms a MacBook Pro with an Intel Core i5 processor in some benchmarks. 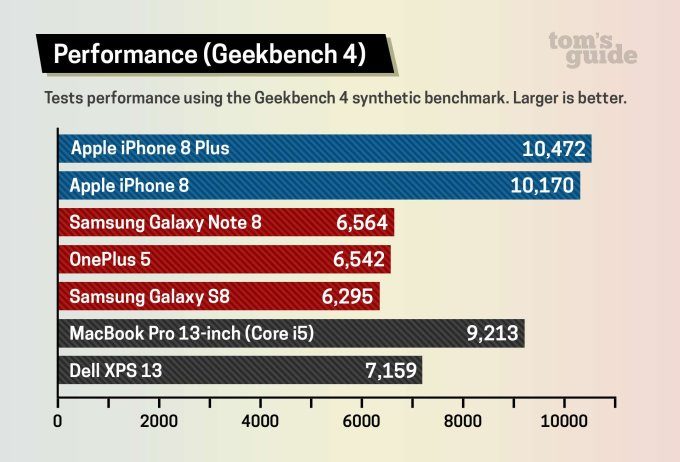 Realistically, that’s more power than you need if you primarily use your phone to surf the web, send text messages, and play Angry Birds. But the extra power enables next-gen applications such as high-performance virtual reality and augmented reality experiences or apps that make use of machine learning.

As for the new cameras, DxOMark says they’re better than the Google Pixel’s, which had been the previous champ in the DxOMark rankings. The Pixel has a score of 90, while the single-camera Apple iPhone 8 gets a 92 and the dual-camera iPhone 8 Plus gets a 94.

DxOMark recently revamped its scoring to account for modern smartphone camera features such as dual-camera devices. And there’s certainly a bit of subjectivity involved: while the organization has a standardized set of criteria, you may prefer a camera with strengths in different areas. But it certainly seems like the iPhone 8 is an upgrade over the 7 when it comes to photography and CPU and graphics performance.

It’s just not entirely clear at this point whether there’s any consistent explanation for Apple’s choice in iPhone names.