Apple’s holding an event to launch new products on October 16th. But the company kind of spilled a few beans a day ahead of that event by posting screenshots of an iOS 8.1 user guide in the iTunes Store which provide names and some details for two new tablets. 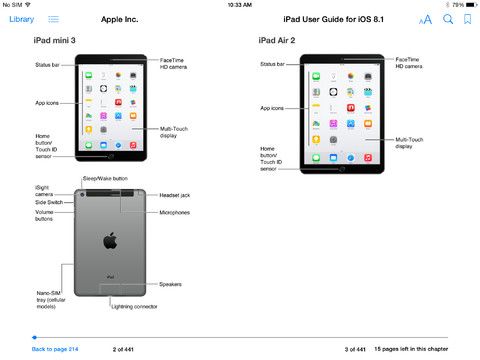 The picture shows two new tablets with Apple’s TouchID fingerprint sensor built into the home button. That’s something that no earlier iPad models had.

There’s also confirmation that the iPad Air 2 will support burst shots for snapping a series of rapid-fire photos when you hold down the Take Picture button. That’s a feature that had previously only been available on iPhones, not iPads.

We’ll have to wait for an official announcement to get more details about the processors, battery life, prices and other specs. But with an Apple event planned for tomorrow, we probably won’t have to wait very long.