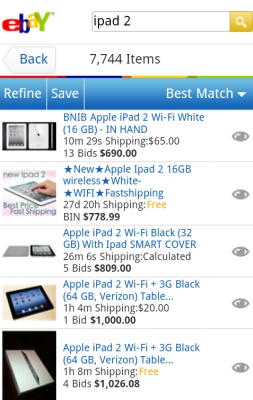 It’s only been a few days since Apple launched the iPad 2, but analysts say the company may have sold as many as half a million units — and good luck finding any in stock at a retail store. Ship date on the Apple web site have also been quickly pushed back so that any new orders will ship in 3-4 weeks. When the iPad 2 order page went live, Apple said the tablet would ship in just a few days.

On the one hand this means that the iPad 2 is proving to be a wildly popular device, much like the original — at least during the launch weekend. On the other hand, it could point to supply problems. It sounds like Apple may be having a little trouble keeping up with demand — which isn’t necessarily a bad position to be in if you’re Apple and you’re 95% confident that you’re not really going to lose many potential customers to Android tablets because of a brief shipping delay.

Anyway, it should come as no surprise that a $499 WiFi-only iPad 2 with 16GB of storage now fetches $700 on eBay. In fact, eBay is riddled with overpriced . In fact, The Next Web reports that the iPad 2 is going for almost twice its normal price in gray market Hong Kong shops.

Meanwhile, researchers at iSuppli estimate that it costs about $327 to actually build an AT&T iPad 2 3G. That doesn’t count the cost of marketing and distribution, but Apple has an edge since the company operates its own retail stores.

In other news, iOS hacker Comex has already figured out how to jailbreak the iPad 2. The tool isn’t available for download yet, but it’s only a matter of time.