Most Apple software is designed to run on Apple devices. But the company has been offering a Windows version of iTunes for more than 15 years, which makes sense because there are a lot of people who use Apple phones and tablets with Windows computers.

While iTunes for Windows has a reputation for being a bit of a sluggish resource hog compared to the macOS version, it does provide a way to manage the apps and media on your Apple devices or to purchase or play music, videos, and other content on a Windows computer.

Now iTunes is also available as a Microsoft Store app. 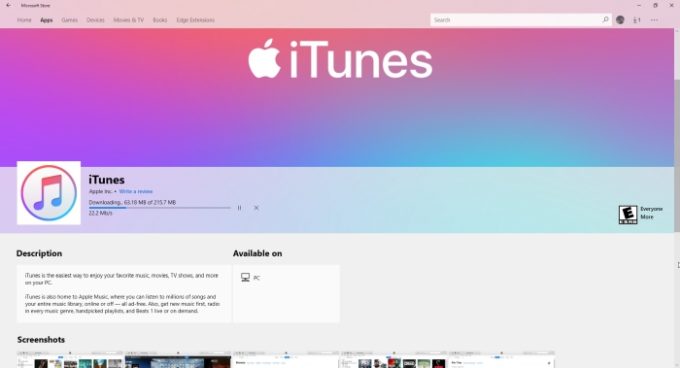 The Microsoft Store version of iTunes is pretty much identical to the version you can download from Apple’s website, but installing the Store version means you can get automatic updates .

It also means iTunes will now work on computers running Windows 10 S Mode. Those systems can’t run other versions of iTunes since they’re restricted to using apps download from the Microsoft Store.

Unfortunately iTunes does not yet support Windows 10 on ARM. You’ll need a PC with an x86 or x64 processor running Windows 10 version 16299 or later.

2 replies on “Apple brings iTunes to the Microsoft Store”