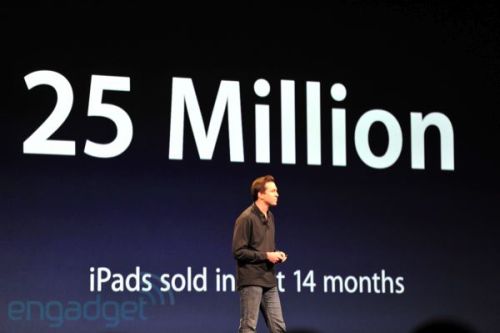 Virtually every PC, phone, and consumer electronics device maker has either released or announced a tablet in the last year. But you know who’s already sold an awful lot of tablets? Apple. The company launched the iPad 14 months ago, and the iPad 2 just a few months ago. And in that time, the company has sold 25 million units.

We haven’t seen concrete stats from Samsung, Motorola, Asus, or any of the other big name Android tablet makers yet, but I wouldn’t be at all surprised if it turns out the iPad and iPad 2 have outsold all the Android tablets combined.

That could change as Google continues to improve the tablet version of Android and as companies work to produce (and market) their competing tablets.