AOKP is a custom for Android phones and tablets that’s earned a reputation for offering users a ton of ways to customize and tweak their device. But it’s been a while since there’s been a major release of AOKP, which means that folks looking for bleeding edge firmware to run on their mobile devices may have had to look to CyanogenMod, Paranoid Android, and other options.

Now the AOKP team is back, and the latest release adds a number of new features and options, as well as official support for a few new devices. 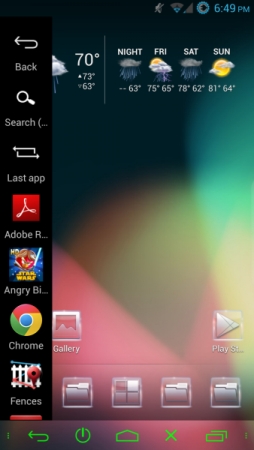 And those are just the official builds. I suspect that like most custom ROMs, we’ll see unofficial ports of AOKP to other devices.

One of the most notable changes is the addition of AOKP Ribbons, a new way to launch apps and other actions. You can swipe your finger from the edge of your display to bring up a Ribbon.

As you’d expect from an AOKP tool, there are a ton of ways to customize Ribbons. Not only can you change the list of apps available at a glance, but you can choose whether a Ribbon appears when you swipe from the top, bottom, left or right of your screen. You can also change the opacity, size, and other visual elements, tweak the colors, animations, or make other changes.

Here are a few of the other changes in AOKP Jelly Bean 4.2 Milestone 2: