The developers behind the popular AOKP Android-based operating system have released their first build based on Android 4.2 Jelly Bean. It adds support for lock screen widgets, Google’s new notification and quick settings panel, and more.

But like earlier versions of the AOKP, what really makes AOKP JB-MR1 Build 1 special is the level of customization it allows. You can tweak everything from the lock screen behavior to the way your phone’s LED flashes. 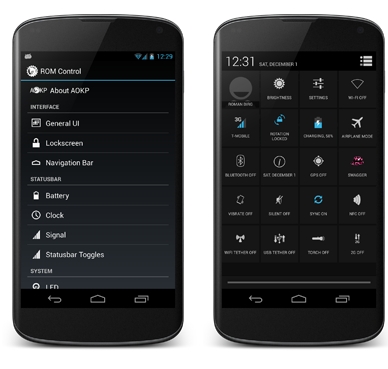 At launch the custom ROM is only available for a handful of devices including the Samsung Galaxy Nexus, Google Nexus 4, and Google Nexus 7. That’s because the team had to start from scratch instead of simply updating early versions of AOKP to Android 4.2.

But many of AOKP’s existing add-ons have been ported to the latest build.

You can find a complete list of features in the release notes, but here are some of the highlights:

You can find more details about supported devices in the AOKP forum at RootzWiki.