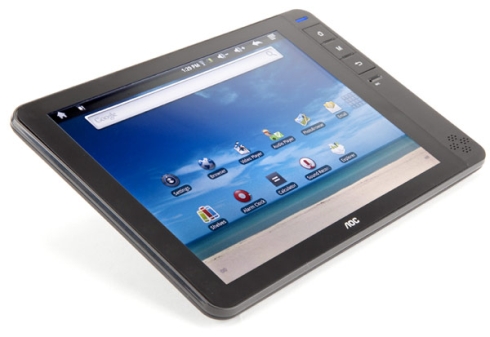 LCD maker AOC is getting in on the Android tablet action with a new Android tablet that actually stands out from the crowd in a few ways. First, the AOC Breeze has a 4:3 aspect ratio thanks to an 8 inch, 800 x 600 pixel display. Second, the tablet has a relatively low price tag of just $200.

The Breeze is powered by a Rockhip processor and Android 2.1. It has 4GB of storage space plus a microSD card slot for expansion. There’s a USB port, headphone jack, and speaker, plus 802.11b/g/ WiFi. AOC says you should be able to get 6 hours of battery life while playing video, or up to 12 hours while playing audio.

The tablet should be available later this month. The press release mentions access to the “Android marketplace” which is not necessarily the same thing as saying it can access the official Android Market. In fact, I’m going to go out on a limb and assume that by using the word “marketplace” instead of “Market,” AOC is suggesting that you can install apps that are generally available for Android without saying that you can easily download them on your device.