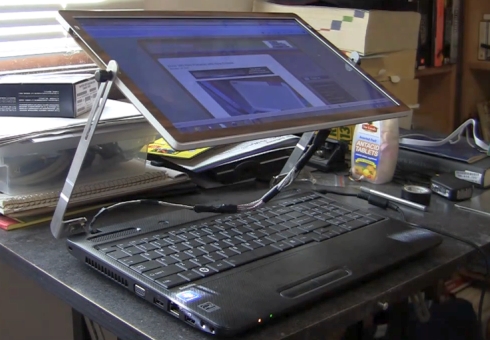 There are a few reasons netbooks took off a few years ago. They’re cheap and they’re portable. But they’re certainly not the only laptop computers that are cheap or portable. If you like the idea of a laptop that can be used comfortably on an airplane tray table but don’t like the idea of using a notebook with a 10 inch screen and a small keyboard, hardware hacker Ben Heck has an idea… his latest hack takes a standard Toshiba laptop and modifies the screen so that it floats above the keyboard to take up less space.

The modified computer can function as a normal laptop — which might be hard to fully open on an airplane without jamming the screen into the seat in front of you. Or you can pull the screen up and tilt it over the keyboard so you’re actually typing under the screen.

OK, it probably doesn’t actually save that much space. But it sure looks cool.

Right now this is just a proof of concept, but it appears to work… although it takes a bit of elbow grease to slide the screen and you’re stuck with a rather ugly looking cable connecting the screen to the base of the laptop.

2 replies on “Another way to make a space-saving laptop”