Anker is probably best known for selling a range of affordable-yet-decent portable batteries, chargers, earbuds, and other smartphone accessories through Amazon.

But last year the company introduced something a bit bigger, in the form of a 434 Wh battery called the Anker PowerHouse. It’s a $500 beast that has a 3-prong power plug as well as a bunch of USB ports for keeping all your devices charged in the event of a power outage (or maybe a camping trip).

Like the idea, but not the price tag? A smaller, cheaper model is coming in mid-2018. It’s called the Anker PowerHouse 200 and it has, you guessed it, a 200Wh battery. The new model will sell for about $300. 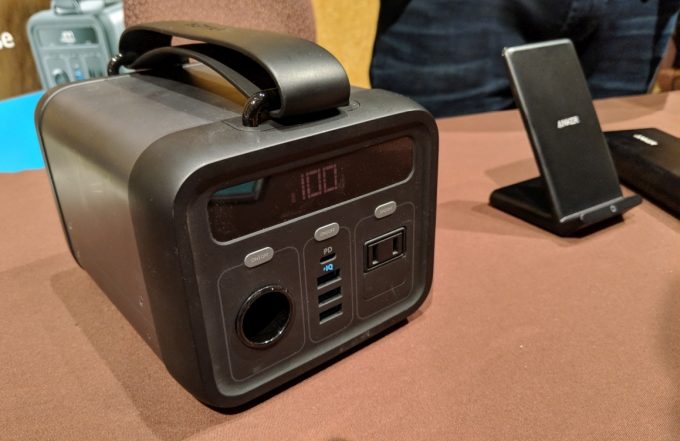 This still isn’t a battery pack you’re likely to carry around with you to keep your phone topped off. It weighs nearly 7 pounds. But it supports 60W power delivery, which should be good enough to charge some laptops, tablets, or other portable devices.

It also has a 3-prong AC outlet that puts out 100W, allowing you to plug in just about anything that you’d normally plug into the wall. Well, anything that uses less than 100W. This thing isn’t going to power your microwave oven or high-power space heater.

Anker is also showing off some of its other upcoming products at CES including some new wall chargers with USB Type-C power delivery and the company is planning to launch some new Qi wireless chargers this year including models that support 7.5 watt and 10 watt output for faster charging. A larger Qi charger that can handle two phones at once is also on the way.