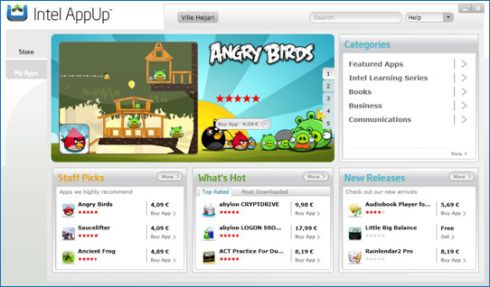 I’ve never been convinced that netbooks and other computers running traditional desktop operating systems such as Windows and OS really need App Store. It’s not like it’s difficult to find free and paid software for these computers, although I suppose a one-stop-shop could encourage users to download more apps because it’s even easier — which I suspect is exactly why companies including Apple and Intel are pushing app stores for desktop software.

Whether you think desktop app stores are a good idea or not, it’s notable that Rovio has launched a version of Angry Birds for the Intel AppUp Center, which is an app store for netbooks and other laptops. That’s because Angry Birds is one of the most downloaded, top grossing apps on both iOS and Android. While the game was designed for touchscreen input, there’s no reason the game shouldn’t be just as addictive on a computer with a mouse and a larger display.

The game is on sale for $4.99, although Rovio eventually plans to raise the price to $9.99. You get 195 levels at launch, and the developer plans to add make more levels available as free updates. There will also be “unique enhancements” that aren’t available in the mobile versions of Angry Birds, although it’s hard to say whether those enhancements justify the price tag. At $10, the new version of Angry Birds is ten times as expensive as the iPhone version.

You can find a video of the mouse-and-keyboard version of Angry Birds after the break.