Android phones and tablets can run thousands of apps… but usually you’re limited to looking at one app at a time. Some companies do offer Android phones or tablets limited support for multi-window support, allowing you to run two or more apps side-by-side. But if you want a more Windows-like experience with a taskbar and a start menu you’re probably better off getting, well, a Windows tablet.

Want the best of both worlds? Andromium OS is a project designed to offer just that: a desktop-style user interface and support for Android apps.

The developers of Andromium ran an unsuccessful Kickstarter campaign in late 2014. But while the team didn’t reach its funding goals, work on Andromium continues — and you can download a free beta version of the app from the Google Play Store. 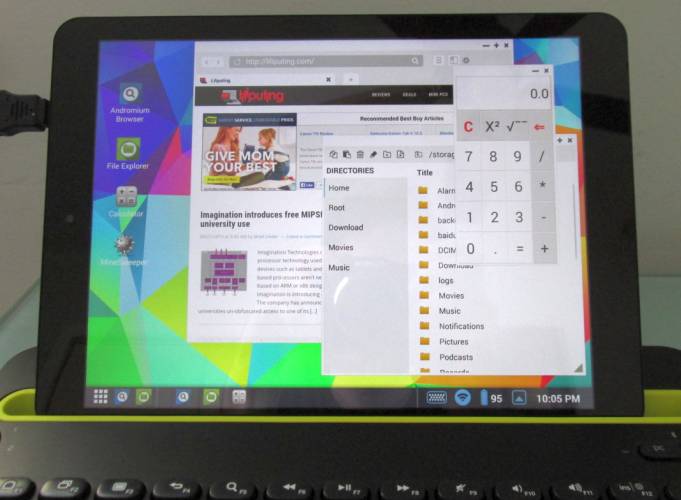 While the app is called Andromium OS, it’s not really an operating system. It’s an app that you can download and install on most phones and tablets running Android 4.4.2 or later (although the developers recommend a device with a Snapdragon 800 or faster processor and at least 2GB of RAM).

Once Andromium OS is installed you can launch it to open an environment with a taskbar, start menu, and status icons for at-a-glance info about the time, battery level, and wireless connection, among other things.

Double-click an app on the desktop to launch it (single-taps won’t do it), or launch apps from the start menu. As of late April, 2015, there are only a few Andromium-specific apps including a web browser, file manager, calculator, and Minesweeper game.

Each of these apps launches in a window that you can drag and drop, minimize, or close. You can also maximize the web browser or file explorer to make the windows larger, but they won’t obscure the taskbar the way normal full-screen Android apps do.

Speaking of normal Android apps, you can launch them from within Andromium OS. Just open the start menu and choose Supported Apps or Untested apps to view a list of apps you can try. They’ll launch in full-screen mode, but you’ll see an Andromium toolbar at the top of the page that features an X icon you can tap to close the app (or a maximize button which lets you view the app in full-screen mode as if it had not been launched from Andromium OS).

The idea behind Andromium is that you can connect an external keyboard, mouse, and display and use your Android phone or tablet like a desktop computer. You can do this by connecting wired or wireless peripherals. I tested Andromium with 9.7 inch tablet, a Bluetooth keyboard and a wireless mouse with a USB dongle but no external display. You could also use an HDMI cable, Chromecast, Miracast receiver, or other device to connect a display.

Right now Andromium has a relatively limited feature set, and still in beta. But it certainly shows promise for folks that want to use a single device as both a mobile and desktop computer.

Eventually the developers plan to offer smartphone docking stations that make it easy to connect a keyboard, mouse and display. It’s likely that the software will also cease to be available as a free download. But right now it costs nothing to try Andromium on your phone or tablet.