Andriod-x86 is an unofficial project to port Google’s Android operating system to run on devices with x86 processors… like the ones made by Intel and AMD. In other words, it lets you run Android on your laptop or desktop PC.

The team has released a new build based on Android 4.2 Jelly Bean, and while it’s a bit rough around the edges, Android-x86 4.2 does let you run Android and install some Android apps on a PC.

I took it for a spin on the Chromebook Pixel. 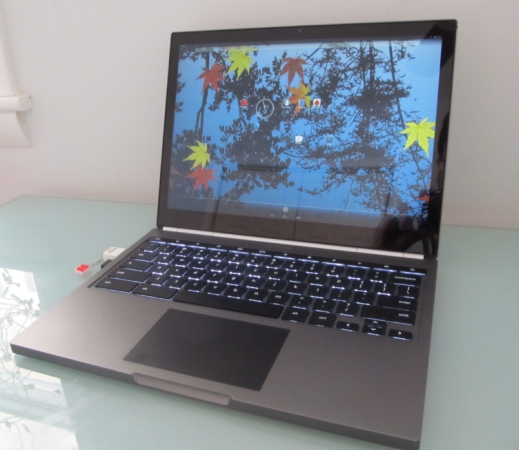 The Chromebook Pixel isn’t the ideal device for this sort of test drive — the touchpad and touchscreen aren’t supported so I had to plug in a mouse, and the notification bar and mouse look tiny on the laptop’s 2560 x 1700 pixel display — but apps like the web browser look great.

Android-x86 4.2 features a Linux 3.8 kernel, support for hardware-accelerated graphics using Intel and AMD graphics chips, and support for multitouch (if you have a supported touchscreen, WiFi-, and other hardware.

But this build doesn’t support Bluetooth or suspend and resume, and many apps available in the Play Store won’t run on a device with an x86 processor.

Some apps will run — but with mixed results. For instance, Google Play Movies worked just fine, but when I tried running the Dolphin web browser it rotated my screen to portrait mode (which is awkward to use on a laptop), and the only way I could switch back to landscape orientation was to install a third party screen rotate app.

Still, if you want to give Android a try on your laptop, there’s no simpler way than downloading Android-x86 and installing it on a bootable USB flash drive. You can always pop out the flash drive and reboot into Windows, Linux, Chrome OS, or what have you if you don’t like it.

I used the LinuxLive USB Creator tool to prepare a bootable flash drive.

42 replies on “Android-x86 4.2 lets you run Jelly Bean on your notebook, desktop PC”