Smartwatches can display notifications from your phone, let you search the web, or order a pizza. But you can also play games on a smartwatch… and that apparently includes Nintendo 64 games.

At least one person with some free time on his hands managed to load a Nintendo 64 emulator on an LG G Watch.

The result is far from perfect. First off, you’ve got to be kidding with the size of those on-screen controls. The virtual joystick is crammed into the lower left corner of the screen, while the A/B action buttons rest in a tiny corner of the right side of the screen. 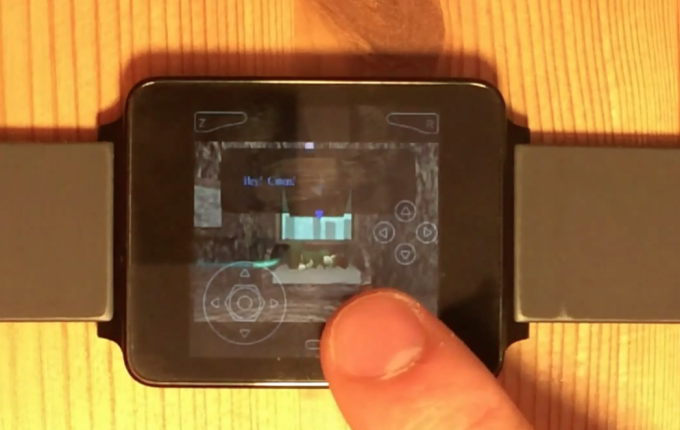 To make matters worse, there is also a directional pad slightly above the action buttons that is so small, even the tiny fingers of a toddler would completely smother it. There are also virtual shoulder buttons at the top of the screen.

Frankly, it’s amazing that the controls don’t completely obscure the screen. However, they are definitely in the best possible positions for use on the diminutive display.

The software is also a bit glitchy. The game stutters and lags as the player runs from one scene to another. However, considering the size of the wrist-worn computer it’s pretty impressive to see Super Mario 64 and Legend of Zelda: Ocarina of Time running at all.

This isn’t the first time hackers have figured out a way to port older software into a smartwatch. Mac OS 7.5 has been ported to an Apple Watch. Someone also figured out how to get Windows 95 running on a Samsung Gear Live. It seems like, as long as the software is about 20 years old, you can get it to run on a smartwatch.

These days, tech DIY-ers are always figuring out new ways to turn low-power computers into wearables, like the guy that turned an old digital watch into a smartwatch, complete with sensors for temperature reading, step tracking, location, and more, or the guy that made is own “Apple II” watch.

I’m still waiting to see a port of the Sega Dreamcast on a smartwatch, myself.