If you want to play Android games or stream video from Netflix, YouTube, or other devices to your TV then an Android TV stick with a single or dual-core processor will probably do the trick. But that hasn’t stopped Chinese device makers from putting out ever-more-powerful models.

One of the latest is an Android TV stick with a quad-core Allwinner A31 ARM Cortex-A7 processor and PowerVR SGX 544 graphics.

The folks at GeekBuying got their hands on a pre-release sample and took it for a test drive. 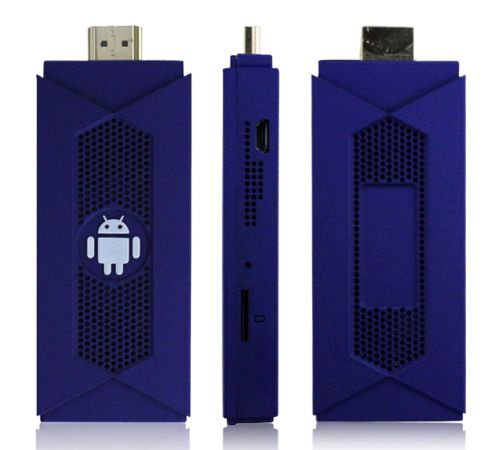 The processor seems reasonably fast, scoring 10915 in the AnTuTu benchmark. That puts it pretty close to what you’d expect from a device with an NVIDIA Tegra 3 processor.

GeekBuying also reports that the device can handle 4K video playback – but out of the box it only actually outputs 1280 x 720 pixels when you hook it up to a TV or monitor. There’s not even an option for 1080p. The hardware should support it, but the included software doesn’t seem to work just yet.

In other words, you might want to wait for a firmware update or two before spending money on this particular unit. But if you just can’t wait, CNX-Software notes that there’s a new seller at AliExpress (with no feedback) taking orders for $101.

The device features 2GB of RAM, 8GB of built-in storage, 802.11n WiFi, 2 mini USB ports, a full-sized USB host port, and a reset button. There’s an HDMI adapter on one end, which you can use to plug the stick directly into a TV. It runs Android 4.1 Jelly Bean.