Android may be an operating system designed for smartphones and tablets with touchscreen displays. But that hasn’t stopped people from loading it on a range of devices including laptops and TV boxes.

This fall Google plans to release Android TV, which is a version of the operating system optimized for big screens. You’ll be able to easily use Android TV apps with a remote control from the comfort of your couch.

But companies have been loading Android on TV boxes for a few years, giving you a way to stream videos from Netflix or YouTube, listen to music from Pandora, play games, or run the XBMC media center, among other things. It turns out that if you plug a keyboard and mouse into one of these boxes it’s actually pretty easy to use Android as a media center or general computing platform.

Using an Android box without a keyboard and mouse can be a bit trickier… and that’s a problem many companies have tried to tackle by releasing remote controls designed to work with Android. 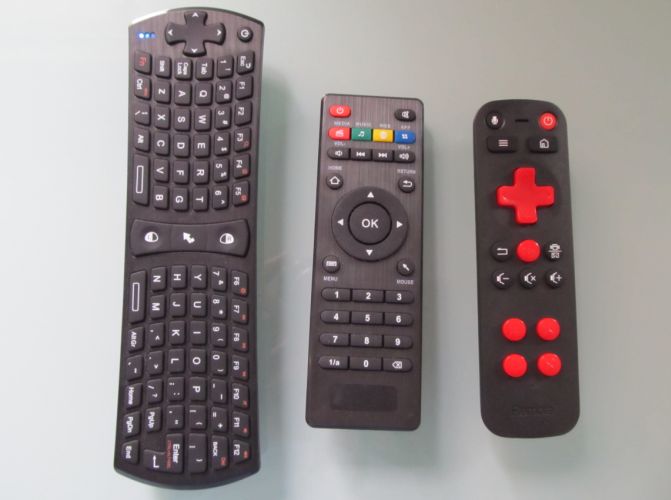 I’ve got a few different remote controls that were sent to me by the folks at W2Comp and Rikomagic, so I decided to do a little Android box remote shootout.

For the purposes of this test, I’m using each remote with the Probox2 EX. This is an Android-powered box with an Amlogic S802-H quad-core processor, 2GB of RAM and 16GB of storage. I recently reviewed the Probox2 EX and found it to be a fast, capable machine… although a bit more complicated to use than something like a Chromecast or a Roku box.

The image above shows, from left to right, the Rikomagic MK704, the remote that comes with the Probox2 EX (and a number of other Android boxes), and the Remote+ which is available from W2Comp for $32 or which comes bundled with the Probox2 EX for $150.

The MK704 has been on the market for a few months and sells for around $20 to $30 at AliExpress, Amazon, and other stores and marketplaces.

The remote that comes in the box with the Probox2 EX is a basic multimedia controller that comes with a number of inexpensive Android TV devices. It’s an infrared remote that includes arrow keys, an OK button in the center, volume controls, a few media buttons, number keys, and Android buttons for home, back, and menu functions.

If you’re using an Android device with a decent TV-friendly launcher this remote might be the only thing you need. With the Probox2 EX I was able to navigate the home screen, launch apps, control media playback in XBMC, and perform other basic functions. 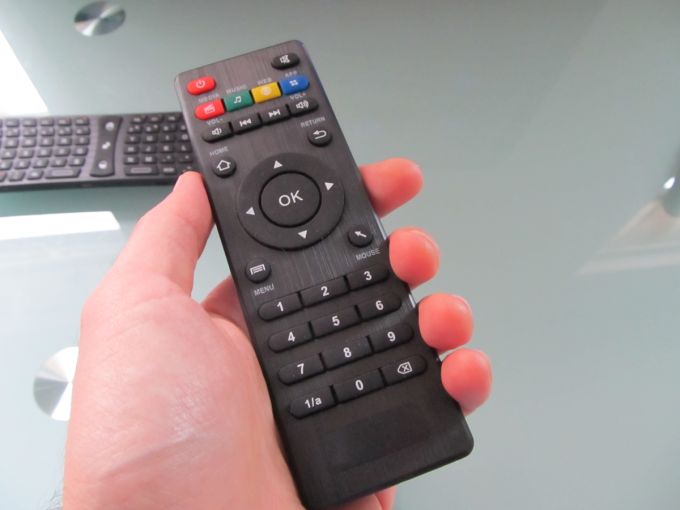 Entering URLs in a web browser, playing games, or performing other advanced tasks are pretty much non-starters with this remote though. If you plan to do those things you might want to opt for a third-party remote or connect a gamepad or a normal keyboard and mouse to your TV box.

There is a mouse mode button on this remote. But it’s tough to use. Press the button and an on-screen cursor will pop up on the display. You need to use the arrow keys to move the cursor slowly across the screen. It’d taking forever to type using the on-screen keyboard this way, but I suppose it’s better than nothing if you’re stuck in an app that doesn’t respond to the back button or which expects other types of navigation.

This $30ish remote also includes arrow keys, Android buttons, and volume keys. But it can do a lot more than the standard remote.

It has air mouse functionality which lets you wave around the remote like a Nintendo Wiimote to move an on-screen cursor. This makes selecting items on the screen, navigating to text boxes, and typing with the on-screen keyboard easier. 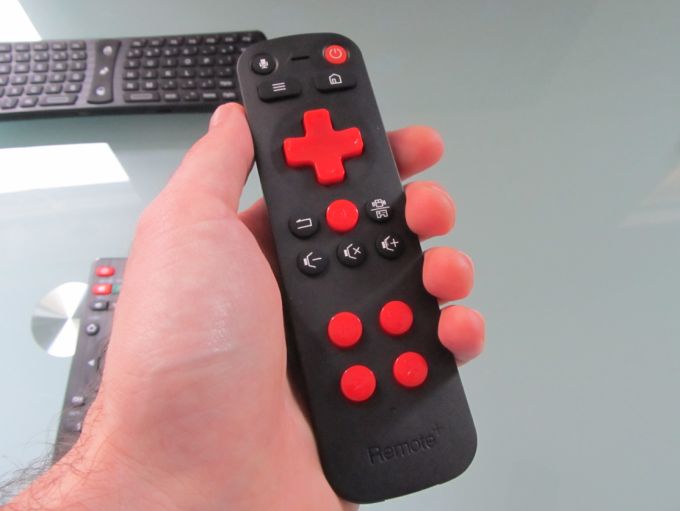 You can even play some simple games by using the air mouse to move the on-screen pointer and click/tap. It’s not a great gaming experience, but it’ll work for some simple Android games.

The Remote+ also has a built-in mic. Tap the microphone icon to activate it and you can use use Voice Search, Google voice actions, or apps like Skype for voice chat.

Turn the remote control sideways and it looks a bit like a classic video game controller — and you can kind of use it as one. When air mouse mode is disabled Android will automatically treat the Remote+ like a gamepad. 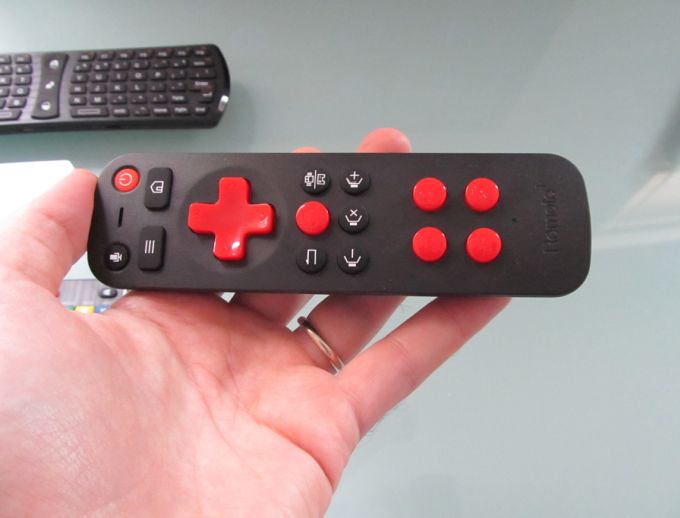 That means Android games that recognize gamepads will try to make use of the A, B, X, and Y buttons. Some games such as Wind Up Knight work perfectly and are at least as much fun to play with a gamepad as they are with a touchscreen. Others such as the racing games Asphalt 8 or Riptide GP2 expect gamepads to have more buttons than the Remote+ has. You can play Riptide GP2… as long as you don’t expect to need the brake buttons.

The Remote+ runs on two AAA batteries and comes with a USB dongle that you can plug into an Android or Windows box to use the wireless remote.

Overall the Remote+ is a step up from the standard remote that came with the Probox2 and it makes it much easier to navigate Android on a TV screen. But there were times during my testing when I still found it easier to just plug in a mouse and keyboard to get things done.

Rikomagic has been making Android boxes for years (the first Android TV stick I tested was the 2012-era Rikomagic MK802). These days the Chinese company offers a number of devices including Android and Linux devices, smartwatches, and remote controls.

The MK704 is one of the most versatile of Rikomagic’s remotes. It combines an air mouse and a full QWERTY keyboard. There are also direction buttons and keys that you can use for Android functions such as home or back or media functions such as volume, play/pause or skip track. 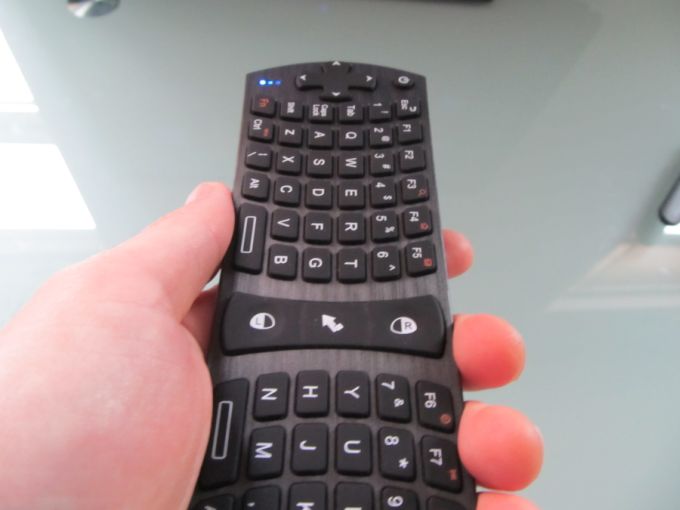 This remote doesn’t have a microphone like the Remote+ so you’ll need a separate mic if you want to use Skype or Google Hangouts for making voice calls. There are also no dedicated gaming buttons. But having a built-in keyboard makes it much easier to enter text for URLs, searches, or other activities.

I wouldn’t want to type out a long email using this keyboard, but it’s fine for entering small amounts of text.

The fact that there are dedicated keys for media playback and Android functions makes this remote pretty useful… but it can take a while to get used to the keyboard layout because there are just so many buttons, and they’re not all located in logical places.

For instance you might think the Home and Back buttons should be near one another, but the Esc button on the far left side of the keyboard functions as the Android back button. But if you want to use the Android home button you need to Hit the Fn button in the lower left corner and press the F4 key at the same time. 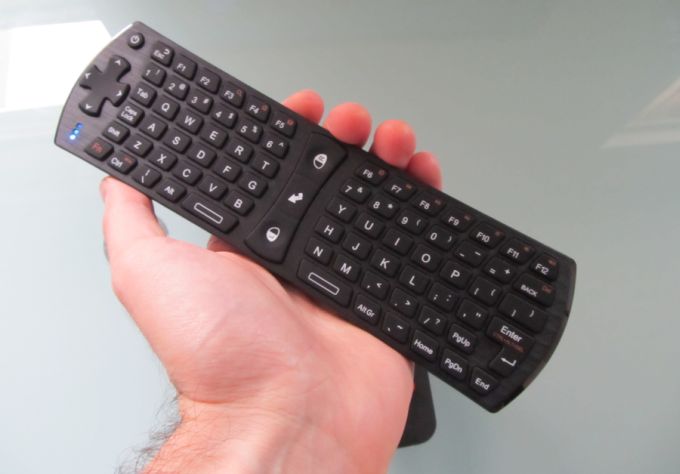 While the MK704 might not be the best option for Android gaming, the mouse + keyboard features of this remote can help you use an Android box without plugging in a full-sized desktop mouse and keyboard.

This remote seems to be a better option than most others I’ve tested if you plan to do a lot of searching, web browsing, or other activities that require typing. But a remote like this might be overkill if you’re primarily interested in using XBMC and other media center apps which work just fine with a few arrow keys and little more.

The MK704 has a built-in battery that you charge with a microUSB cable. It also comes with a USB dongle that lets you connect the remote to an Android or Windows box wirelessly. 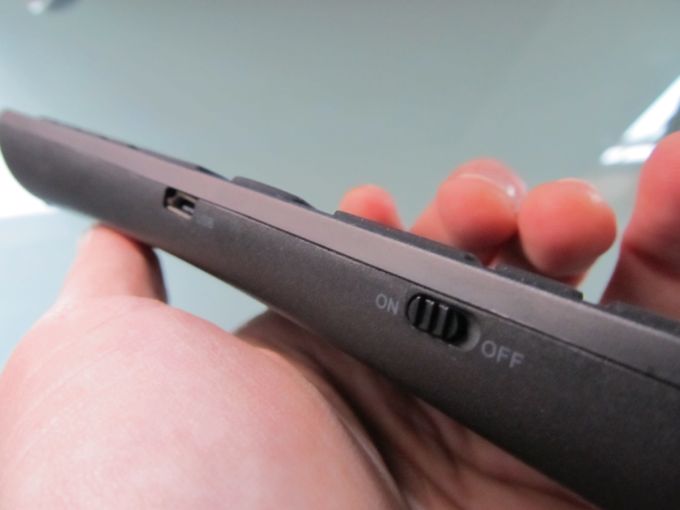 Are any of these remotes the best option for controlling an Android TV box? It depends what you plan to use your Android box for.

This isn’t an exhaustive look at all the wireless remotes that are available. I just happened to have 3 models sitting on my desk at the moment and figured I’d compare them. Of these three, the basic remote is probably the least useful… but it’s not exactly useless.

Remotes with air mouse functionality can make it much easier to use Android on a TV, and the MK704’s keyboard makes text input much simpler, but the huge number of tiny buttons can make other actions a bit complicated.

I really like the simplicity of the Remote+ but wish that text input wasn’t so tedious with this remote and that it had a few more buttons for gaming purposes.

We’ll probably see a whole slew of new remote controls designed to work with Google’s new Android TV software when it launches this fall. That software will be designed for use on televisions and could make all three of these remotes seem obsolete. But until then, these are three inexpensive remote controls that can let you use an Android box to do at least some things while sitting on your couch.

9 replies on “A tale of 3 Android TV remote controls (MK704, Remote+ and a generic model)”