Over the past year we’ve seen a number of companies put out small boxes designed to let you run Android apps on a TV. Now we’re starting to see boxes that are even designed to sit on top of your TV, while pointing a camera your way so you can make video calls, snap self portraits, or fix your hair.

The Archos TV Connect is expected to hit the streets any day now for about $130. But you can already find a few Android TV boxes with front-facing cameras if you don’t mind shopping for Chinese devices from lesser-known companies. 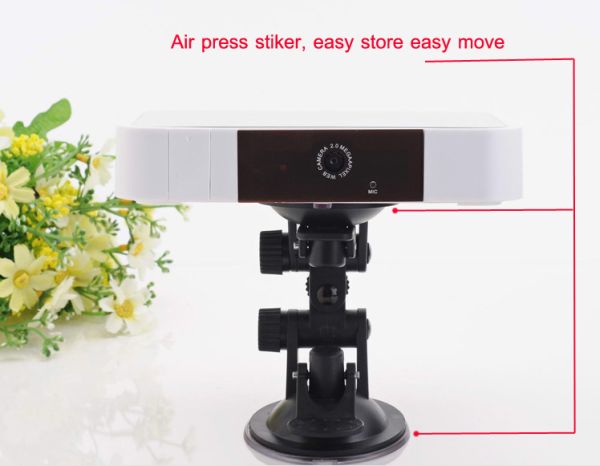 The A70 TV box features an Amlogic AM8726 ARM Cortex-A9 processor, 1GB of RAM, 8GB of storage, and Android 4.1 software. It features Mali 400 graphics and a front-facing camera and built-in mic.

On the back of the box there are VGA, HDMI, S/PDIF, and AV ports, as well as an Ethernet jack. The front has a panel with 2 USB ports, and there’s a full-sized SD card slot on the side.

The device appears to come with an adjustable stand that you can place on or near your TV, letting you angle the box so that the camera is pointing at the right place.

It also supports DLNA for streaming content wirelessly from a mobile device to you TV.

The A70 Android TV box sells for $86 at AliExpress — but I haven’t seen any user feedback for this product yet, so proceed with caution.

The EU2000 fills a similar niche. It’s an Android TV box with 1GB of RAM, 8GB of built-in storage, and a front-facing 5MP camera with auto-focus and a built-in mic.

But this device features slightly more dated hardware and software. It has an Allwinner A10 ARM Cortex-A8 processor and runs Android 4.0 Ice Cream Sandwich.

The good news is that we already know you can run Ubuntu, Fedora, and other Linux-based operating systems on devices with Allwinner A10 chips, which means that you could treat this device like a small Linux box for your TV.

It also comes with a clip designed to help you position the EU2000 atop a flat-screen TV or monitor.

A number of sellers are offering the EU2000 at AliExpress, with prices running from $84 to $99.

2 replies on “Android TV boxes that sit on top of your TV, point a camera at you”