Google has released an update to its Text-to-speech app for Android, and it removes the “high quality” voices the company introduced earlier this year.

Don’t worry though… they’re only gone because Google says its standard voices now sound better than the high quality voices they replace (although some users disagree). They also take up a lot less storage space. 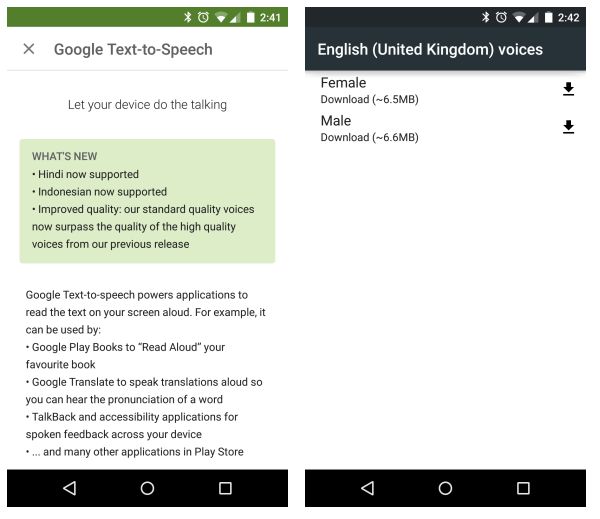 While the old high quality United States English voices could use anywhere from 100MB to 300MB of space, the new standard voices use just about 6.5MB.

Text-to-speech is the engine that allows Android devices to read some content out loud. That includes eBooks in supported apps such as Google Play Books or FBReader with the TTS plugin and content from other apps that support TTS features.

The app also works with Android’s accessibility features which let users with visual impairments navigate their device with spoken feedback.

If you’ve been using the old high quality voices and don’t want to give them up, just make sure not to delete the voice data or change your default voice. Once you update the app there’s no option to download high quality voices anymore, but if you’ve already downloaded them it looks like you won’t lose them… at least not right away.