Android: It’s not just for phones and tablets anymore. We’re seeing Android in everything from refrigerators to washing machines these days, and sometimes even in devices where the OS makes sense.

A company called Remote Solution is showing off an Android TV box at CES this week, and it’s designed to work with a nifty little touchscreen remote control and wireless keyboard setup. 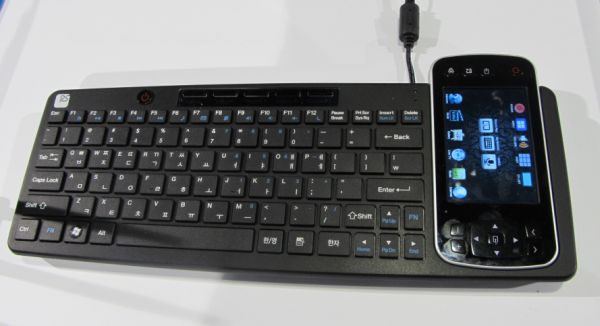 The remote is basically a tiny tablet with direction buttons and dedicated hardware buttons for a few functions such as power and audio.

But most of the action takes place on the touchscreen, where you can launch apps on your TV, move an on-screen cursor by swiping your finger across a virtual touchpad, use an on-screen keyboard, or enter voice commands using the built-in mike.

The remote also fits into a slot on a full-sized wireless keyboard which you can use for faster text input.

The remote features a 720 MHz ARM Cortex-A8 processor, 512MB of RAM, 2GB of storage, and software running on top of Android 4.0. It has a 3.5 inch, 480 x 320 pixel touchscreen display and support WiFi and Bluetooth and has an IR port so it can be used as a universal remote.

Remote Solution is based in South Korea, and isn’t selling this setup at retail in the US yet, as far as I can tell. Instead, the company appears to be looking for partners to bring the system to market.

6 replies on “Android-powered keyboard, remote and set-top-box turn a TV into a complicated Android media center”