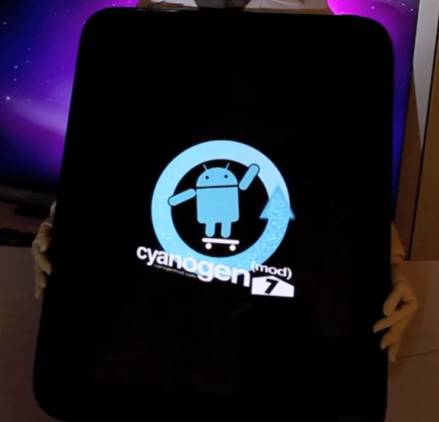 Getting Google Android to run on the HP TouchPad would have been an interesting project a month ago, but it took on new urgency when HP discontinued the tablet recently. Suddenly folks lucky enough to get find the tablet in a store or place an early order on the web were able to snatch high quality tablets for as little as $99. But since HP had discontinued the TouchPad there are no guarantees that we’ll see future software updates.

So several groups of independent developers started working hard to get Android up and running on the tablet. Sure, Google isn’t going to support the TouchPad in the future any more than HP is, but Google will continue to work on the Android operating system and if the OS can run on the tablet then a community of hackers can keep the software on the tablet up to date. Admittedly, there are webOS hackers as well, but with the future of webOS in doubt, there may not be a big corporation backing development of the OS much longer.

At least two different teams are working to bring webOS to the TouchPad: CyanogenMod and TouchDroid.

Porting the Android operating system to the HP TouchPad takes a lot of work. That work got a lot easier when a few tablets were discovered in the wild with Android already running. These were likely test units that chip-maker Qualcomm or one of HP’s other partners had installed a test build of Android on, but since one TouchPad user shared the source code, some folks have been able to reverse engineer some of the software to help get Android up and running on HP’s software.

And then things took a turn for the strange. Here’s the good news: it looks like you may not have to wait much longer for a fully functional version of Android that can run on the HP TouchPad tablet. This week TouchDroid showed off working touchscreen drivers, and CyanogenMod showed off almost everything working on the tablet. WiFi is still a work in progress though.

But the CyanogenMod team accused TouchDroid of copying its work and trying to pass it off as original. TouchDroid countered that they hadn’t simply taken the code from CyanogenMod, but had instead found it posted anonymously on a public Pastebin page.

That’s not exactly the same thing as claiming it was original work, since it raises the question of who this anonymous source was in the first place… but more to the point, the CyanogenMod teams claims to have reverse engineered the touchscreen drivers from the publicly release source code.

Now someone has copied a chat log that allegedly shows members of the TouchDroid team openly discussing finding CyanogenMod’s code, rewriting it to look a little different, and pretending it never came from CyanogenMod. The chat log is pretty damning, but also very, very long. You can also read a shorter version that highlights some relevant portions of the conversation.

Update: A member of the webOS-internals team contacted us to point out that their name gets thrown around a lot in the chat log.

While a member of the webOS homebrew development community did offer to share WiFi code with the TouchDroid team, the WiFi drivers in question were designed for Angstrom Linux, not Android and may not have been much use. The webOS internals folks say no member of their team ever offered to share pre-release CyanogenMod code with the TouchDroid team, despite what’s claimed in the chat log.

CyanogenMod is based on open source Android software, and there are plenty of developers that have written different Android firmware based on CyanogenMod code… but they typically give credit where it’s due and only release their software after CyanogenMod has made its version publicly available. If these allegations are correct, TouchDroid isn’t just trying to steal code, the team is also trying to steal credit.

That may or may not have anything to do with the $2300 bounty for the first team to get Android up and running on the HP Tablet. But given the amount of work involved in porting Android to the TouchPad, it’s unlikely that anyone is in it just for the money.

Update: Nope, it ain’t about the money. The CyanogenMod wants to donate the prize money to charity if they win.

It’s certainly possible that the chat log is a fake, but given other recent news from the TouchPad camp, the allegations certainly seem plausible.

Update: Nope, it’s not fake. The TouchDroid team has disbanded following the controversy.

In the end, none of this probably matters to most users. All that really matters is that Android will soon be available for those that want to install it on the HP TouchPad. It may come first from the CyanogenMod team, or it may come first from Team TouchDroid (possibly with code from CM). Eventually it’s likely that we’ll see multiple versions of Android for the tablet, especially once developers try to get Honeycomb or Ice Cream Sandwich working on the TouchPad. Right now all development efforts are based on Google Android 2.3.5 Gingerbread.

5 replies on “Android on the HP TouchPad: competing teams duke it out”