Google’s annual Google I/O developer conference starts on May 28th and the company has just released the schedule for the 2-day event.

Developers can learn about ways to add features o improve performance of their Android apps, get information about developing for Android TV, or learn about Chrome OS or web apps.

But the schedule also hints at a few new brand new things, including the possible introduction of a new type of wearable device and the unveiling of Android M, the next version of Google’s mobile operating system. 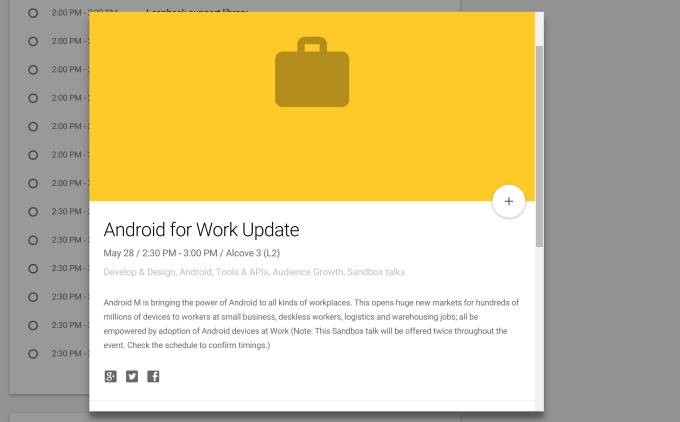 Google’s already removed the “Android for Work Update” session description that mentioned “Android M,” but not before the folks at Android Police and Droid Life grabbed screenshots.

There’s also a separate “What’s new in Android” session, suggesting that there’s something new to talk about.

There’s no word on what those new features will be, what the “M” stands for (but it’ll probably be a dessert), or when Android M will launch. The company could release it to the public as soon as I/O. But Google could also tease some upcoming features and release the software later in the year. There’s precedent for both approaches.

Google’s ATAP (Advanced Technology and Products) Team has been responsible for some of Google’s most unusual, ambitious projects over the past few years. This is the team that developer the Project Ara modular smartphone and the Project Tango technology for tablets and other devices that can create 3D maps of the environment around them.

Members of the ATAP team will be giving a presentation to talk about Project Ara, a new “Spotlight Story” with 360 degree video and sound, and “new wearables that we hope will blow your socks off. (We mean this more literally than you might think).”

The description of the session says the goal is to find ways to have wearables with small screens that still support rich interactions.