Google is preparing to launch the next version of Android this fall, and it will feature a new “Material” design language with bright colors and animations meant to look and feel a bit like flipping between pieces of paper.

But not all phones running Android L will look the same.

Some devices like the upcoming Google Nexus 6 will likely run Google’s stock version of the operating system, while others like the Samsung Galaxy line of phones will feature their own custom skins.

The folks at SamMobile got their hands on an early build of Android L for the Samsung Galaxy S5, and they’re giving us an idea of what Google’s next operating system will look like on Samsung’s flagship smartphone. 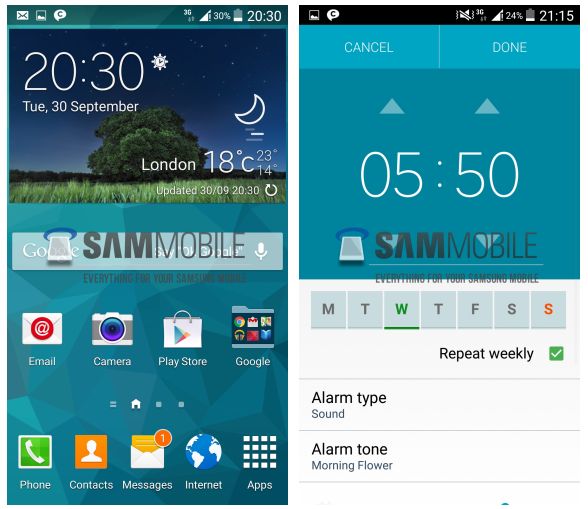 SamMobile reports that Samsung has redesigned all of its apps including Messages, Memo, Clock, Music, and the phone dialer to comply with Google’s new design guidelines.

There’s also a new theme that uses a lot of white where earlier versions of Samsung’s TouchWiz skin used blue, and there’s support up to two notifications on the lock screen (rather than the 4 you get with the stock Android L software).

Some things haven’t changed much — the home screen and app launcher don’t look all that different from earlier versions, and you can still swipe down from the top of the screen to access Samsung’s own version of the Android quick settings panel. You also get a Samsung keyboard instead of the stock Android keyboard — but you can always replace that with a third-party keyboard (or even the Google Keyboard).

You can find way more photos at SamMobile, or check out the video below for more details.