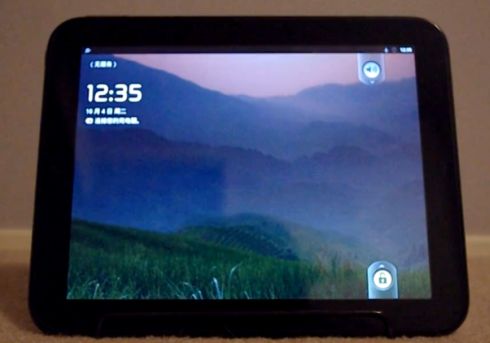 Update: You can now download and install an alpha version of CyanogenMod 7.1 Android for the HP TouchPad.

While the folks behind the CyanogenMod Android software have been working on a process that would let you install Android on the HP TouchPad and dual boot Android and webOS, Chinese developer Chomper has been taking a different approach. Today he released an app that lets you run Android on the TouchPad without rebooting — just as if it were just another webOS application.

Right now the project is still in the alpha testing stage and it’s pretty rough around the edges. While you can unlock the screen, pull up the app drawer, and run some applications, trying to launch many apps will cause Android to reboot and the touchscreen to lock.

Currently there’s no support for multitouch, audio or OpenGL graphics. The camera doesn’t work either and there are no menu or back buttons. The whole system seems kind of slow and apparently it’s impossible to install third party apps so far.

That said, as you can see from the video, Chomper’s app basically lets you install and run Google Android 2.3 Gingerbread without removing webOS or futzing with the file system.

It should be interesting to see how the project progresses, as it could present a relatively safe alternative for those that are wary of using the CyanogenMod tools to change the TouchPad’s disk partitions and install Android.

If you want to take the leap and install Chomper’s Android app you’ll need to to first install Preware to enable support for Homebrew applications, download the IPK file and then use webOS Quick Install to load it onto your TouchPad.

Unless you speak Chinese, you’ll also probably want to change the Android language settings to English right away.