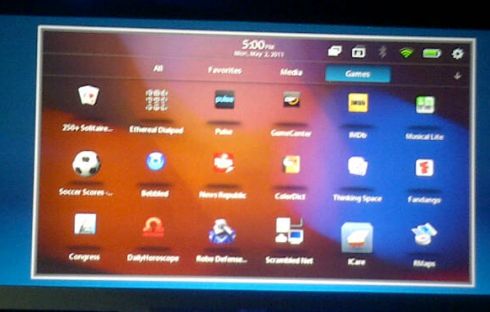 Research in Motion has already stated that it would release native PIM (personal information management) apps for the BlackBerry PlayBook. Now we have something approaching a time frame. At the BlackBerry World keynote this morning officials promised that calendar, contact, and email apps would arrive this summer.

Right now the only way to use calendar, contact, or email apps on the PlayBook is to use the Blackberry Bridge software to connect the tablet with a BlackBerry smartphone — or rely on a third party app or web-based app. The PlayBook does have a pretty good web browser, after all.

RIM also showed off the first Android apps working on the PlayBook. The tablet will be able to run apps developed for Android just as if they were native PlayBook apps thanks to a Dalvik Java virtual machine and an app player. Since the PlayBook doesn’t have the home, back, and menu buttons required by most Android apps, RIM has configured the software so that you can use gestures to simulate button presses.

The Android apps will be available for download from the BlackBerry App World, just like any other PlayBook apps. You can see how the apps will work in the demo video after the break.

via CrackBerry, IntoMobile, and PocketBerry