It looks like Google is getting ready to roll out an Android update that will allows users to synchronize app data across multiple devices. In other words, if you have the same game installed on your phone and tablet, you’ll be able to start a game on one device and pick up exactly where you left off on the other.

The update is part of the new Google Play Services 3.1 package. It’s not yet available to the public, but the folks at Android Police got their hands on a pre-release version and have been mining it for details. They also recently discovered Google’s Play Games social gaming service in the same set of files. 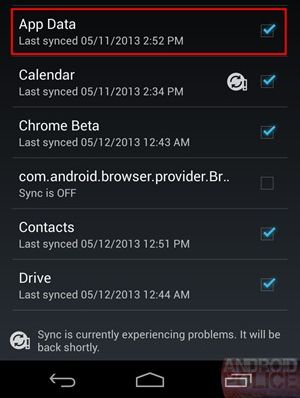 It’ll be up to developers to take advantage of the data sync, but if they do we could see more than just saved game progress synchronized across devices. You might be able to start a movie on one device and resume where you last paused on another. Note-taking apps might be able to synchronize your grocery or to-do lists without hooking into Google Drive, Dropbox, or another app. And that’s probably just the tip of the iceberg.

It’s not just good news for folks that are already using a phone and a tablet. It could also make the process of upgrading to a new phone a lot simpler, since you’ll be able to move more of your data from one device to the next.

There’s no telling when Google will start to roll out Play Services 3.1, or if the company will add or remove features before launch. But sometime around the Google I/O conference which is scheduled to start Wednesday seems like a safe bet.

Other changes in Play Services 3.1 include a new People Details sync service which ties into the Google+ social network, and sync for location data and activities. We should know more about those features once Google I/O is underway.