Google began rolling out support for the Google Play Store and Android apps on some Chromebooks in 2016. This year it looks like the company is preparing an update that will make it easier to view and interact with multiple Android apps at the same time.

Chrome Unboxed has posted some pictures of a pre-release version of Chrome OS featuring Android 7.1 integration. Up until now, the Android subsystem on Chromebooks was based on Android 6.0. 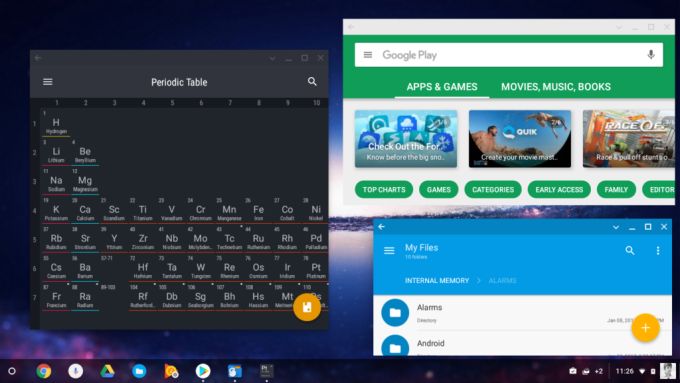 One of the most noteworthy differences is that Android 7.1 includes native multi-window support. When it comes to Chromebooks, that means you’ll be able to view two Android apps side-by-side in split screen mode. But it also means you’l be able to launch multiple Android apps in their own windows, and resize those windows to take up as much or as little space as you want.

Another improvement is that Android apps will keep running even when they’re not in focus. So you can start running an app and it will keep running in the background, even if you’re looking at a different app in the foreground.

In other words, Android apps are about to work a lot more like desktop programs when running on a Chromebook. Up until now, they’ve acted more like smartphone apps that just happen to be shown on a device with a larger screen and a physical keyboard.