Google is bringing a feature that used to be a Pixel exclusive to at least one older Nexus phone.

Android 7.1.2 beta started rolling out for select devices this week, and some users have noticed that there’s now an option for Nexus 5X users to swipe down on the phone’s fingerprint scanner to display notifications. 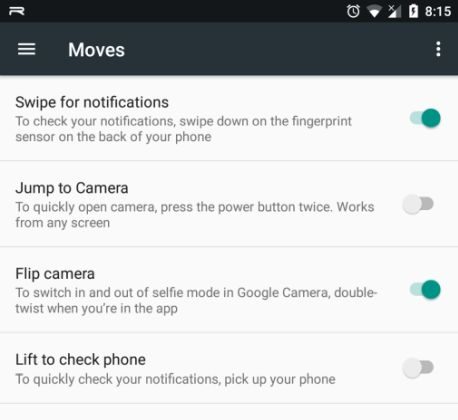 The option is the latest addition to Android’s “Moves” settings, where it joins other optional gesture-based features such as the ability to open the camera app by double-clicking the power button, switch between front and rear cameras by double-twisting your wrist while holding the phone, and the option to view notifications when your phone is locked just by picking up the phone.

It’s possible that the new gesture could become available for other phones in the future, but like most Moves, it will obviously only work on devices with the supported hardware. In this case, you’ll need a phone with a fingerprint reader… and it may have to be a specific type of sensor (or one that’s placed on the back of the phone, as it is on the Nexus 5X and Pixel phones).

Google hasn’t rolled out Android 7.1.2 beta for the Nexus 6P yet, but there’s some speculation that the new feature could come o that phone too.