Google may have no plans to release an official Android 4.4 software update for the Samsung Galaxy Nexus. But the nice thing about phones that ship with unlocked bootloaders is that you can load your own software — and like most Nexus devices, there’s a pretty healthy developer community involved with the Galaxy Nexus. 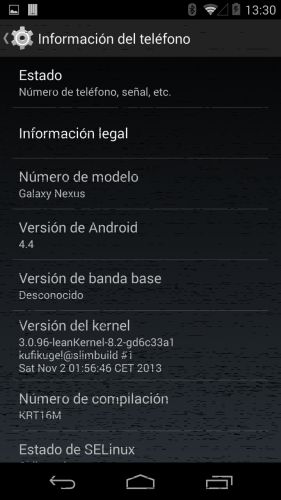 The software is based on the Android Open Source Project code, so it looks a lot like the software you’d get if you bought a Google Nexus 5. It’s still a bit rough around the edges, with some bugs — but developers are working to squash those pretty quickly. If you’re looking for a stable version of Android 4.4 for your phone, you’ll probably want to hold off on installing this custom ROM unless you want to help with development.

But the speed with which we got unofficial builds of Android 4.4 for the Galaxy Nexus is a good sign of things to come. Google may be abandoning support for its older phones, but the independent developer community will likely help keep it alive for years to come.

The Samsung Galaxy Nexus was released in October, 2011. Google’s official reason for dropping support is that the phone is more than 18 months old, and that companies regularly phase out support for devices once they hit that age. But there are plenty of people who bought the phone just over a year ago, before the Nexus 4 was announced. So not all Galaxy Nexus users have had the phone for 18 months or longer.

It’s also interesting that the Galaxy Nexus was the last Google Nexus phone to feature a removable battery and removable back panel — and also the last Nexus phone built by Samsung, a company that’s increasingly competing with Google by offering its own app stores and APIs for Android (although that hasn’t stopped us from getting a Samsung-built Nexus 10 tablet and a Google Play Edition Samsung Galaxy S4).

But maybe Google really just doesn’t want to spend the time and effort necessary to keep older Nexus devices up to date, when it’s pretty clear independent developers and enthusiasts who really care about these things will do them anyway.

Meanwhile, by pushing the latest versions of Google Play Services and other Google Apps to phones running Android 4.3 and earlier, Google can still offer updates and improvements to older devices without releasing firmware updates.

6 replies on “Android 4.4 KitKat ported to run on the Samsung Galaxy Nexus”